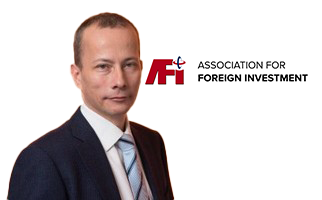 “I am truly pleased that my colleague and members have placed their trust in me even after ten years in the position of Chairman. I believe that, with the renewed team of the Steering Committee, we will take on a new dynamic that will be necessary in the post-COVID period,” said Chairman Blažek, commenting on his re-election. According to Blažek, there are a number of goals that the AFI has set for itself over the next two years. “We want to spur on the Czech Republic’s pro-investor policy in order to be an attractive destination for foreign investors for a longer time and, mainly, to be helpful and active at the level of policy, municipalities, regions and individual companies. Our other goals include, among other things, support for and working with municipalities so that we can help towns and cities to build a real business environment and business zones that will attract new and interesting investments,” Blažek added.

The AFI’s objective is to bring new foreign investors to the Czech Republic and to contribute to the improvement of conditions for their business, domestic legislation and the investment environment. The AFI was established in 1996 at the behest of the Czech government (Ministry of Industry and Trade and CzechInvest) as a platform for cooperation between the public and private sectors. The AFI’s mission is to promote the Czech Republic as a country that is ideal for new investments and business.

“Foreign investments have a positive impact on the economy as such. Investments in technology and development in, for example, the areas of industry, artificial intelligence, construction, IT and other sectors are important from the day-to-day perspective. New technologies are expanding rapidly and those countries that possess such technologies are coming out on top. Therefore, there is strong interest in their placement here and a competitive battle in which an important role is played by stimulative aid in the form of direct and indirect incentives, as well as other aspects. From the perspective of a foreign company, without stating a specific focus, this involves new business opportunities, as well as the long-term prosperity of the state, purchasing power and competitiveness in many respects,” said Marta Šťastná, deputy Chairwoman of the AFI and representative of the member firm CBRE.

Nevertheless, according to Šťastná, the quality and long-tern benefit of investments, in relation to which it is appropriate to carry out objective evaluations and respond to changing needs, are important factors. “The member companies of the AFI rank among the leading professionals in various fields and perceive these trends sooner and can thus be helpful (toward the government, for example). I would also mention that we positively perceive the effort to systematically protect the markets of the EU and of the Czech Republic through the approved Act on Verification of Foreign Investments, as it is necessary to keep an eye on strategic sectors and control over them,” Šťastná emphasised.

At its annual conference last year, the AFI pointed out that the Czech Republic lacks a long-term investment strategy and that investments are impeded by numerous factors. The cost of labour is rising, infrastructure is lacking, municipalities do not have money for co-financing and the coronavirus pandemic is worsening. It is difficult to predict which steps the state will take, while decision-making on investments does not even reach the European level.

Therefore, the AFI is striving over the long term to enhance the options available to municipalities with respect to taking decisions on the entry of investors as well as their financial capacity. The situation could be improved by an adjustment in the budgetary allocation of taxes, at least at the level of corporate income tax. The budgetary allocation of taxes determines which budget the relevant tax or part thereof flows into. Tax revenues have an impact on the the income of municipal budgets, as well as their financial stability and independence. At this time, however, there is no political will to undertake such an adjustment at the level of the Ministry of Finance, the government or the municipalities themselves.