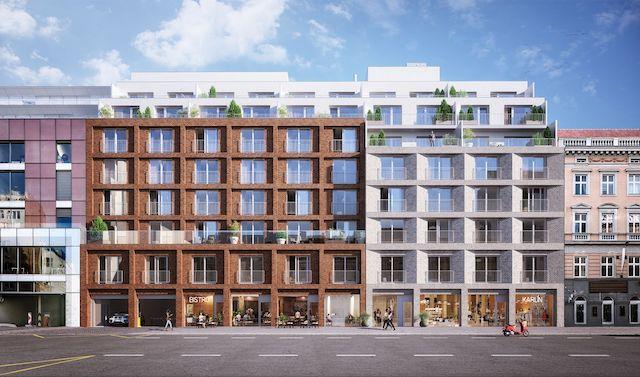 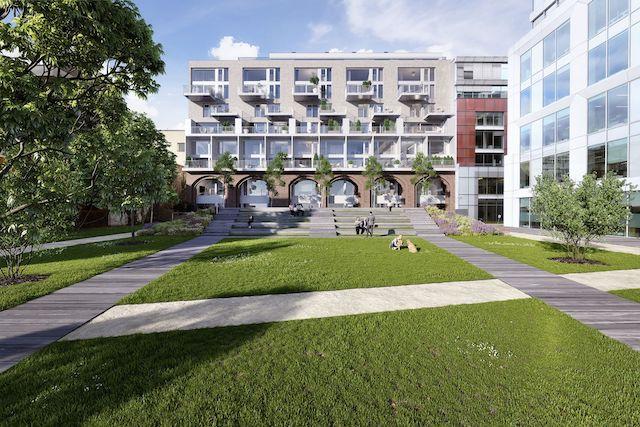 Set in the originally developed part of Karlín and filling in a gap on Křižíkova Street, the multifunctional Dva domy project is being built by Karlín Group in cooperation with the Diocese of Hradec Králové. Its distinctive appearance is the work of the renowned Bevk Perović Arhitekti studio. Svoboda & Williams will exclusively offer two commercial premises in the building.

Dva domy is Karlín Group’s latest project in Karlín, where it has developed many buildings so far, and even in this case its focus was on creating something architecturally significant that would fulfil multiple functions. Identifiable at first glance due to its dual façade, once finished, the building will offer 112 apartments for sale and two large commercial premises with a total area of 1,528 sq. m.

Both commercial spaces will face Karlín’s “high street”—Křižíkova—and feature large-format shop windows. On the south side, the spaces will provide views of the newly emerging park of the Corso Karlín and Corso II office buildings. There is also a new boulevard that practically connects Křižíkova and Pernerova streets. Sold in a state of shell & core, the commercial spaces come with parking spaces and storage areas in the basement.

“The Dva domy building is emerging in the most sought-after part of Karlín, in close proximity to Corso Karlín, Vitra Koncept’s showroom, and the brand new PRAGA Rezidence complex. It offers great visibility and space for a showroom, a gallery, or novel corporate headquarters,” says Jan Mráz, Senior Property Consultant at Svoboda & Williams.