SAVE THE PLANET – new exhibition at the Norblin Factory 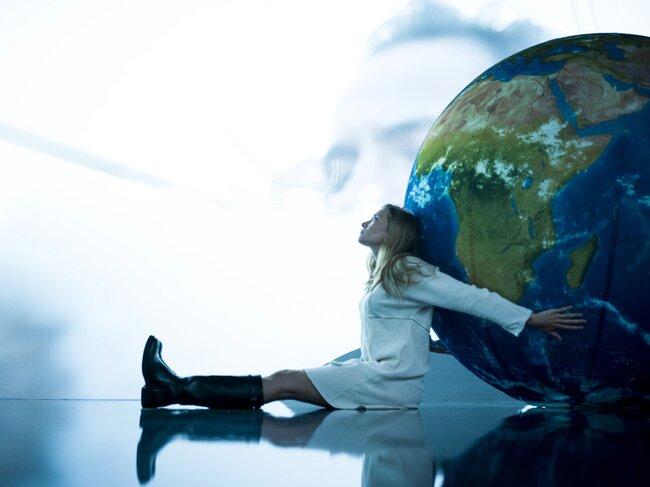 The international multisensory SAVE THE PLANET exhibition will be presented in the only immersive space in Poland, Warsaw's Art Box Experience at the Norblin Factory. The birth of the planet, the origin of life on Earth, the beauty of nature and the development of civilization have been presented together with a decalogue of actions each of us can take to stop climate change. The creators of the exhibition have combined beautiful images, the experience of full immersion, stunning visual effects with classical music and cutting-edge technology in ways never seen before. The exhibition will be held from 24 September to 15 January.

The latest offering from the Art Box Experience is a story of the Earth in four acts, told with flair and in a modern formula. SAVE THE PLANET exhibition is a Polish-Brazilian co-production. Its originator and producer is Piotr Sikora, the award-winning co-creator of Platige Image studio and co-founder of Art Box Experience.

- I wanted to create an entertaining project that would, in a light-hearted and super-attractive visual way, raise people's environmental awareness, especially among young people. Art Box presents the history of the Earth in a unique way that allows you to experience immersion through images and sound, which tend to keep us engaged much more than a traditional cinema or exhibition.

Jarbas Agnelli, a Brazilian filmmaker, artist and four-time winner of the Cannes Lions Festival, is responsible for the script, direction and music. He based the musical arrangement of the exhibition on Antonio Vivaldi's world-famous composition “The Four Seasons”, giving it an emotional cinematic feel.

- "The Four Seasons was a fantastic foundation for me to create an exhibition about the history of the Earth, simply because Vivaldi created this composition with nature in mind. Using sheet music, he tried to recreate the sounds made by various animals, including birds and insects, but also the sounds of storms and even fire. As a result, we created a four-chapter saga telling the story of our planet. And it worked out great! Originally, "The Four Seasons" were composed for violin concertos. But our film was about something else, we wanted the whole orchestra to be involved. We had dreamed of a multimedia concert, which is why we needed a really solid arrangement. The score was only 40 minutes long, but we needed a touching soundtrack longer than an hour, so I had to reinterpret the whole thing to make it longer, more powerful and more cinematic. It is music to an emotional story about the very strong relation between the planet and the mankind since the beginning of its existence, as well as the problems we are facing today. I added electronic elements and so-called sound design. It really is a very comprehensive arrangement and it was a fantastic experience for me.

The four stages of our history

The exhibition takes us through all stages of our planet's existence. It begins with stunning images representing the sequence of the Big Bang and the formation of stars and galaxies. This is where the Platige Image team stepped in and used advanced digital technology to depict the birth of the Earth. Zuza Kołodziej is behind an unusual projection that surrounds the viewer, allowing them to go deep into the ground, observe the animated movement of particles and listen to the sounds they make. Spring is a time of climax for the planet: violent volcanoes, melting rocks, fire, rivers, oceans. It is also an incredible journey for the viewers. We are going to look into volcanoes and to the bottom of the oceans, travelling across all continents and oceans with schools of colourful fish, Arctic penguins, whales, colourful birds, antelopes and cheetahs. The epic moment accompanied by contemporary music is the emergence of man on Earth. The beginning of summer signals a shift in civilization. The images illustrate the expansion of humanity across the planet – roads, cities, buildings, planes. Life is gaining momentum. However, after the climax comes autumn. The progress of civilization is linked to dirt and poverty. Reckless use of natural resources affects life on Earth on many levels, disrupting a balance that has lasted for centuries. Our insatiable cravings are destroying forests and wiping out all forms of life. We can see the consequences: floods, fires, garbage, thousands of square miles of plastic floating in the oceans, rising sea levels. In winter, the state of our planet is already disastrous. Eventually, it is nature itself that says 'stop'. The pandemic forces humanity to stop. In just one month, the hole in the ozone layer has shrunk and the global temperature has dropped by reducing carbon dioxide emissions in major cities by 50%.

The development of civilization poses an increasing threat to our planet. The international character of the project makes it possible to observe this globally, as exemplified by the recordings of forest fires in the Amazon, but also locally: for example, the drought in various parts of Poland or the deteriorating condition of the Baltic Sea. The exhibition raises the question: what can we do about it, how can we address adverse and dangerous climate change? The last room leaves you with hope! Together with Onet as part of the Long Live the Planet! campaign we have prepared a decalogue of changes. These are ten simple habits and actions that each of us can take to save the planet.

- As Sir David Attenborough says, "If, working separately, we are a powerful force destabilizing our planet, surely, working together, we are powerful enough to save it". At Onet, we believe that by working together, we still have a chance to preserve the planet for future generations. Each action, even the smallest one, matters. Poles want to act but still more than half do not know how to go about it. That is why for the last 3 years we have been educating and inspiring Poles to change their daily habits as part of the LONG LIVE THE PLANET campaign and now the SAVE THE PLANET exhibition," says Olga Korolec, CMO & Sustainability Director RASP Polska.

- I used to think that popularizing science was enough to communicate all sorts of information to people, including that of climate threats and global warming. My friend Jonathan Ramsey suggested a different approach. While shooting the film "It's OK to Panic", I had to get rid of many different habits and ways of talking about nature and what is around us. This exhibition is yet another way of telling the story. We all have our own sensitivities and various ways of presenting information reach us differently. I hope this exhibition will reach many of us and help us reflect on the future and what we need to do to ensure a brighter tomorrow. Or perhaps even existence?

In collaboration with Aeris Futoro Foundation, as part of the Czas na Las [Time for Forests] campaign, we are counting the carbon footprint of the exhibition to neutralize it with tree planting. Therefore, this will be the first exhibition in Poland certified with a neutral carbon footprint.

- This is the second exhibition at Art Box, in which we combine a worthwhile, wise and at the same time captivating story with what is our strongest point, namely, state-of-the-art audiovisual equipment and technologies that cannot be found anywhere else in Poland. By taking our viewers on a journey into the depths of the ocean or into distant skies, we wanted to sensitize and encourage them to introduce even small changes in their daily lives. By combining environmental education with entertainment, our exhibition - in a highly attractive form of a multisensory show - allows us to better understand the problems affecting the modern world, says Joanna Kowalkowska, the president and founder of Art Box Experience.

SAVE THE PLANET – is also a series of follow-up activities. There are unique exhibition tours, workshops, meetings with travellers, panel discussions or concerts coming up.

The exhibition will be open to the public from Saturday, 24 September 2022 at the Art Box Experience at the Norblin Factory in Warsaw.