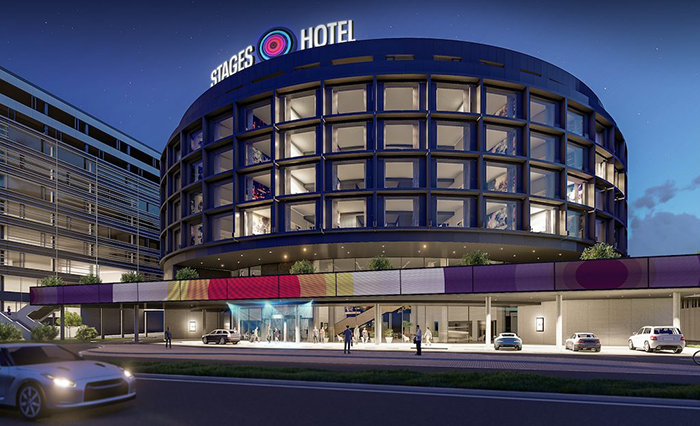 A hotel with 300 rooms is being built near the O2 arena in Prague. It will be inspired by music and large international concerts held in the neighboring multi-purpose hall. Its opening is planned for the fourth quarter of this year. The owner and operator of Stages Hotel Prague is Bestsport, which also operates the O2 arena and the O2 universe. The company stated this in a press release today without stating the amount of the investment. Bestsport belongs to the PPF investment group.

The hotel will offer 300 rooms including 27 suites, there will be six multifunctional conference rooms. It will include a Backstage Bar with an outdoor terrace and a restaurant with access to the inner atrium with a capacity of up to 270 guests. There will be a music lounge for various types of events. The hotel's underground garage can accommodate 100 vehicles. Stages Hotel Prague will be part of the Tribute Portfolio group of the Marriott hotel chain.

Music will be the unifying element of the interior. For example, according to Otakar John, CEO of the hotel, the reception is styled like a stage. "We transferred the musical motifs to the rooms themselves. For example, instead of a classic lamp, we chose a spotlight that is used for professional photography, we replaced the ordinary mirror with a typical theater, in each room there is a bluetooth speaker," he said.

Simultaneously with the construction, the area around the hotel in Prague 9 is changing. The road between the O2 arena and the hotel will become a pedestrian zone. It is to be completed at the same time as the hotel.

Bestsport, formerly Bestsport Arena, which operates the 02 arena, is part of the PPF Group. The Group acquired Bestsport at the end of 2013 in the division of assets with the KKCG Group following the previous joint purchase of the lottery company Sazka.

According to STR, the Prague hotel market is the most affected in Europe by the effects of the coronavirus crisis. Average room revenue fell 84.6 percent. The main reasons were a drop in occupancy by 78.5 percent to 16.6 percent and a decrease in average prices by 28.1 percent to 66 euros (about 1,716 CZK) per room. However, the interest of investors and hotel operators has not waned, according to Cushman & Wakefield, and they expect the market to recover after the restrictions expire. However, the overall recovery is not expected until 2024.