A bicycle tower has started to be built in Hranice u nádraží, which will cost CZK 19 million 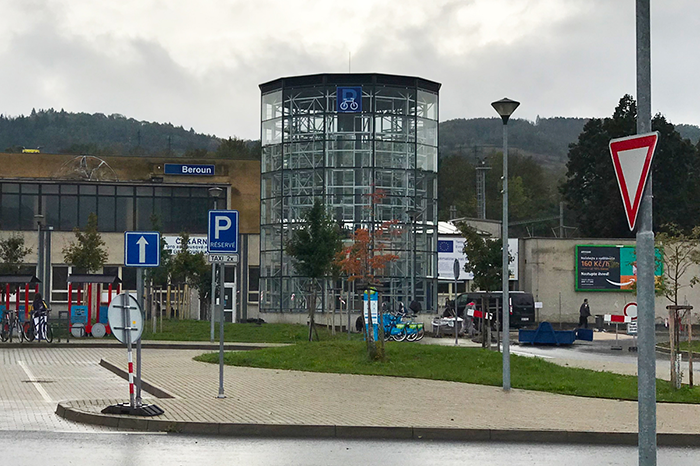 The construction of a bicycle tower for more than a hundred bicycles began at the train station in Hranice in the Přerov Region. It should be ready in July. The bicycle tower will cost 19 million crowns, of which almost 15 million were received by the city as a subsidy, Petr Bakovský, a spokesman for the border town hall. Since the construction of the tower, which enables safe parking of bicycles, the city promises that people will use this mode of transport more, thus relieving congested traffic around the station.

"The construction of the cycle tower was started in April, the capacity of the tower is up to 118 laps. It is another step to support bicycle transport in Hranice. We recently built a cycle path from Teplice to Hranice. There are still a lot of cars, congested traffic and it is not a solution to still add parking spaces, "said a spokesman for the town hall.

The city expects from the bicycle tower that some of the drivers who now drive to the station will start using bicycles or scooters, which will solve the problem of parking in the locality. Until now, they did not have the option of safely storing their bikes in the station area. "The cyclist will then be able to store the bike safely and quickly. In addition, parking the bike will be cheaper than if he came to the station by car. We believe that the frequency of cycling to the train station will increase and thus facilitate car traffic," added Bakovský.

The city has a problem with parking at the train station for a long time. In the past, it significantly expanded the number of parking spaces and set up additional parking lots in the unused part of the bus station. Since the end of last year, an intelligent parking system has been launched here in the form of light boards informing about the occupancy of places. To reduce the traffic load, the city introduced free public transport in April last year.

Bicycle towers usually stand at train stations. Parking under the roof is used mainly by owners of more expensive bicycles, who do not want to leave them locked in front of the station. The area of ​​the tower is monitored by cameras of the city police. Part of the tower is an automatic self-service system, storing or releasing the bike takes about half a minute. In most cities, people pay five crowns a day for safekeeping, holders of the Czech Railways In-card have free safekeeping. The new cycle tower was put into operation by the town hall in Šumperk for the last time after extensive reconstruction of the bus station, in January this year, for example in Přerov it has been used by cyclists since 2015.