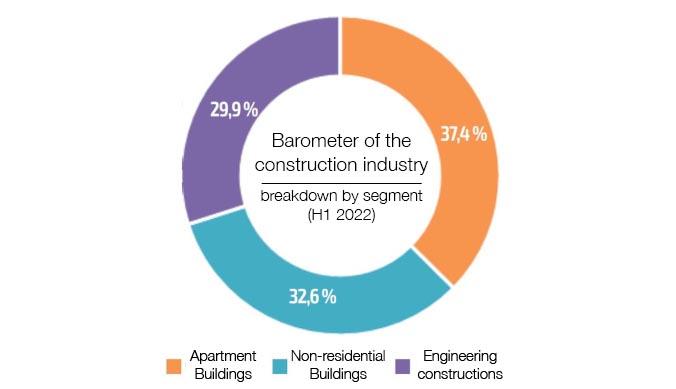 The potential contribution of housing construction to the Czech economy exceeds CZK 300 billion over the past six months. New apartments are a win not only for the market, but also for the state - they solve the housing crisis and mean big gains for the public sector in taxes and other fees. Yet the permitting process, which has long held back construction, has still not been speeded up. Slovakia could be an inspiration, where a new building law is set to significantly speed up the permitting process.

Residential construction remains politically undervalued in the Czech Republic, although its potential contribution to the economy is high, and in the past six months it was the largest of all segments of the construction industry. According to the Construction Barometer - an analysis by Central Group and KPMG Czech Republic - residential buildings can bring CZK 308 billion, non-residential buildings CZK 269 billion and civil engineering CZK 246 billion. In total, the buildings permitted in the Czech Republic in the past six months have the potential to contribute more than CZK 823 billion to the economy.

Flats in the pipeline in Prague alone can bring over CZK 180 billion in VAT to the state.

Housing construction means hundreds of billions of crowns in taxes and other fees for the state budget. In Prague alone, the public administration collects an average of around CZK 1.5 million in VAT from each new apartment. The metropolis receives additional money from so-called "contributions", or "voluntary" contributions from investors to public infrastructure - on average, it receives a quarter of a million from each apartment.

"It is in the best interest of the whole country to speed up the permitting of new buildings. In Prague, for example, over 134,000 new flats are stuck in various stages of the approval process. These would not only help solve the current housing crisis, but would also bring more than CZK 180 billion to the strained state budget, and that's just in VAT," said Dušan Kunovský, founder and head of Central Group, during the November meeting of leaders of the Czech construction industry at Prague Castle.

There is currently great uncertainty in the construction industry due to a huge increase in the price of building materials, a shortage of workers and unprecedentedly high energy prices. This is further compounded by very expensive loans, which make financing for most construction companies and the use of mortgages fundamentally more difficult. Construction prices are thus rising significantly, and often the lead times are being extended. Many public and private developments, including residential projects, are now on hold or delayed.

In Slovakia, it can take as little as 6 weeks to permit an apartment building.

Uncertainty about the final wording of the new construction law, which according to promises by political officials was supposed to set more favourable conditions for new construction, is worsening the situation in the construction industry, which has been rocked by the energy crisis and the war in Ukraine.

Slovakia, which is well ahead in preparing pro-development legislation supporting new construction, could be an inspiration for the Czech Republic. The permitting processes required for successful construction are to be significantly shortened in Slovakia thanks to the new construction law.

"The new construction law, which is already in force in Slovakia and will come into force in 2024, will allow an apartment building that does not require an EIA - i.e. under 500 parking spaces - to be permitted in about six weeks," Slovak Deputy Prime Minister for Legislation and Strategic Planning Štefan Holý said at the Czech Construction Leaders' Meeting.

However, even the best construction law will not help the Czech Republic and its capital if there are not enough areas on which to build. Exchanges of unused land owned by the state for apartments from private developers can help significantly. There is also a need for more financial incentives for new construction in the towns and villages in which they are built.