Construction of the Dvorecký most will begin in Podolí, which will connect Prague 4 and 5 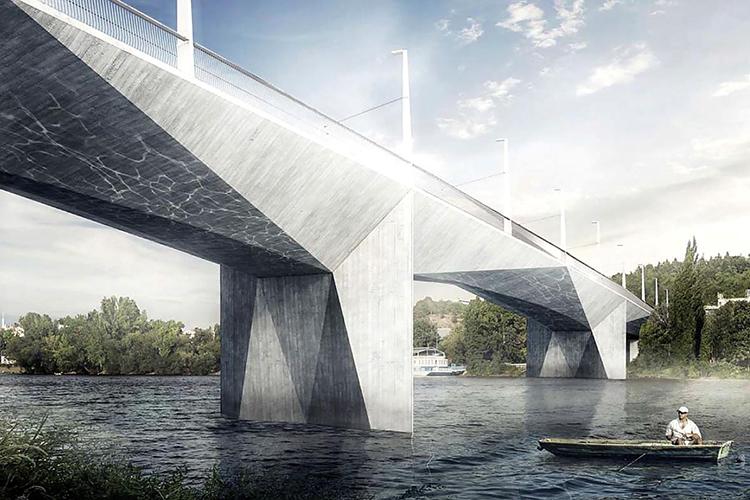 In Prague's Podolí, the construction of the Dvorecký bridge, which will connect Prague 4 and 5, will be ceremonially started today. The bridge over the Vltava will be used by trams, buses, cyclists and pedestrians, and rescuers will be able to cross it. Construction will cost CZK 1.075 billion and will be built by the companies Metrostav TBR, Strabag and Firesta Fisher. It should be completed at the turn of 2024 and 2025.

The eastern end of the bridge will be at the Žluty lázně north of Jeremenkova street, the western end will be near the Lihovar tram stop. It will be 388 meters long and 16 meters wide. The construction includes both forecourts of the bridge, including a footbridge for cyclists, a retaining wall and works of art. The bridge will complete the missing connection for public transport, pedestrians and cyclists between the banks of the Vltava.

The bridge will enable trams to connect the fourth and fifth districts, specifically the lines leading from Barrandov and Modřany. It will also be used by a part of the bus lines that now run on the busy Barrandovské bridge.

So far, the last bridge in Prague over the Vltava, Trojský most, was put into operation in October 2014. It replaced a temporary tram bridge from 1981, nicknamed "Rámusák", whose operation ended on October 7, 2013. In 2020, the city put into operation a new footbridge over the Vltava in Troj on the spot the one that collapsed in 2017. The municipality also started the construction of the Štvanická bridge from Holešovice to Karlín this year. There is also talk of building the so-called Rohan Bridge, which would connect Jateční Street in Prague 7 with Urxová Street in Prague 8. No decision has yet been made about its construction.