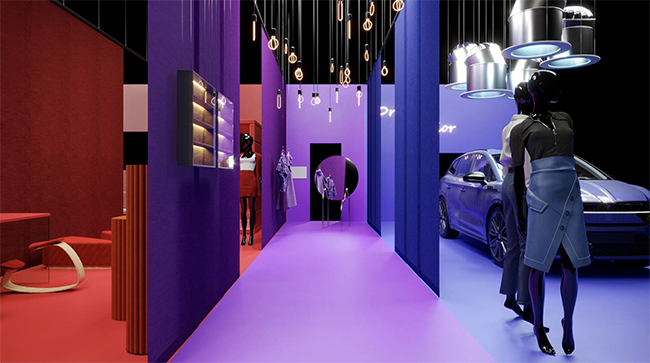 Twelve Czech companies present their products as part of a joint exhibition at the international design festival S/ALON BUDAPEST, which takes place on September 24-26 in the Budapest Sports Arena. This is the first event under the auspices of the CzechTrade Design Center, whose mission is to promote Czech industrial design abroad and provide domestic companies with discounted design services from the CzechTrade Designers Directory. The main goal of participation in the fair is to support innovation, competitiveness and export of Czech companies. The designer Iva Bastlová is behind the design of the exhibition.

S/ALON BUDAPEST is a prestigious design show aimed at professional designers, bloggers, journalists and those interested in luxury products. Companies and designers together fill one large space with their "small" interiors, where they present the best of their production. The individual exhibits then represent imaginary spaces for living, from purely visual compositions to magnificent versions of real estate. Under the auspices of the CzechTrade Design Center, 12 Czech companies take part in the event, from home accessories, through jewelry to cars.

"The CzechTrade Agency is a special guest of this year, also thanks to the renewed Design Center, which has become a national platform for state design support and a guarantor for the field of design. The mission of the CzechTrade Design Center is, among other things, to promote Czech design and its internationalization, which is why S/ALON BUDAPEST brings a unique opportunity to raise the profile of important Czech designers and innovative companies abroad, ”says Zuzana Sedmerová, senior project manager for Design for Competitiveness at CzechTrade.

The CzechTrade exposition at the prestigious S / ALON BUDAPEST trade fair is called DREAM INTERIOR. The author is Iva Bastlová, who designed and created a concept based on experiences. The main task of the exhibition is to attract and present the high level of Czech brands through manufacturers and designers, whose products will be presented here. Last but not least, it should leave a trail, an idea, energy and a positive charge in the visitors.

"The entire exhibition is designed so that visitors can dream and walk through a fantasy space that transports them to another reality. They can start the tour in the blue garage, from where they take a purple corridor full of lights to the red study, and finally anchor in the soft pink dining room. The exhibition will shine with colors, but it will not only be about the colors themselves, but also about their meanings, symbolism and denial of myths. The second level will be about connecting the female and male world, their differences, intersections and disillusionment. Blue is not just the color of men, just as pink is the color of women,” explains designer Iva Bastlová.

The implementation was carried out on the spot by the director of the foreign office of CzechTrade Hungary, Dóra Egressy, who also ensures the overall acquisition and represents the exhibitor to potential business partners. "We believe that the exhibition will help exhibiting companies to open their doors, both to the local market and to the whole world. The portfolio of exhibiting companies is really wide. From lighting solutions such as aroma lamps, interior lighting or designer LED bulbs, through acoustic products to Japanese blinds and jewelry,” says Dóra Egressy.