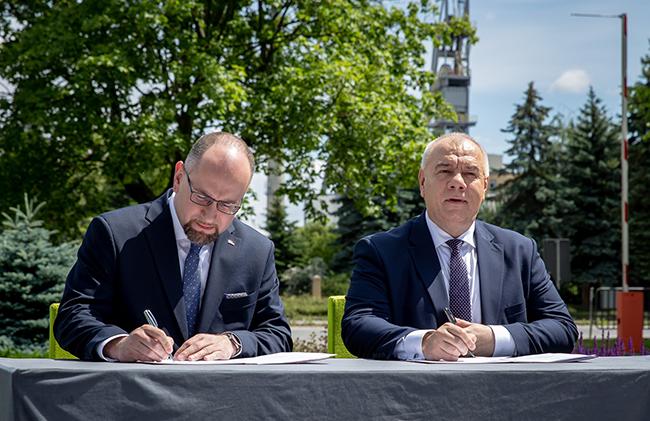 The State Treasury will purchase a total of 21,962,189 shares of LW Bogdanka from Enea by the end of 2023 - envisages the letter of intent signed by the parties. Pursuant to its provisions, Enea and the Ministry of State Assets will cooperate in the preparation and execution of the share purchase transaction. The implementation of the assumptions of the letter of intent is important from the perspective of the energy security of the state and is essential for the transformation of the domestic energy sector, including the implementation of the Enea Group Development Strategy.

Enea owns 64.57% of shares in Lubelski Węgiel "Bogdanka". The State Treasury expresses its interest in purchasing all LWB shares held by Enea.

The letter of intent at the headquarters of LW Bogdanka was signed by: Deputy Prime Minister Jasek Sasin, Minister of State Assets and Paweł Majewski, President of the Management Board of Enea. The event was attended by the management of LWB, as well as employees of the Lublin mine.

"The Polish energy sector is at a very important moment. By controlling strategic assets, we work out the best, safe path for transformation. Bogdanka is a promising company of key importance for the energy security of the state, and its acquisition by the State Treasury will secure Poland's interest," said Deputy Prime Minister Jasek Sasin, Minister of State Assets.

"Signing a letter of intent with the State Treasury is a key event for the Enea Group and LW Bogdanka. Bogdanka is an important and valuable part of the Enea Group. At the same time, the environment - especially financial institutions - requires companies like ours to dynamically and completely change their approach to coal as an energy carrier. Thanks to the initiative of the State Treasury, our Group will be able to fully focus on the green transformation provided for in our Development Strategy, i.e. the dynamic development of renewable energy sources. We will also secure a stable future for the largest employer of the Lublin region," said Paweł Majewski, CEO of Enea.

The signing of the letter of intent was possible thanks to the adoption by the Council of Ministers of the resolution on the activities related to the acquisition by the State Treasury of shares in Lubelski Węgiel "Bogdanka" S.A., which was submitted by the Minister of State Assets.

LW Bogdanka mines mainly steam coal, which is used by domestic power plants as fuel for electricity generation. Most of the mine's production goes to Kozienice Power Plant and Połaniec Power Plant, which are part of the Enea Group.

The plan to acquire LW Bogdanka's shares by the State Treasury is important for Poland's economic policy, primarily in terms of securing the state's interest in the area of ​​energy security. It also results from the conditions on the coal market in terms of the price and availability of the raw material related to Russia's aggression towards Ukraine. The transaction will secure control over the strategic asset ensuring coal supplies to the national economy entities responsible for energy production. The above actions are in line with the government's plans to reorganize conventional energy in Poland.

Enea actively participates in the transformation of the energy sector and develops innovative projects and renewable energy sources. It is one of the largest energy concerns in Poland, co-responsible for the country's energy security. It provides energy to over 2.7 million customers. It is the vice-leader of the Polish electricity market in the field of electricity production. The Group manages the entire value chain on the electricity market: from fuel, through electricity production and distribution, to sales and customer service. Enea has been listed on the Warsaw Stock Exchange since 2008.