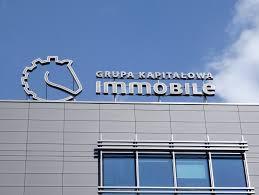 The Immobile Capital Group (GK Immobile) is working on further acquisitions in the construction and industrial sectors.

"The companies from our group are constantly working on possible acquisitions, both in the construction and industrial segment. First of all, we are looking for companies from these segments that complement us in terms of products. However, they are smaller companies and certainly not on the scale of Atrem or Projprzem" - President Rafał Jerzy, said.

One of the assumptions of GK Immobile is development through acquisitions, in which it has already been successful. In recent years, the Group has acquired two listed companies - PJP Makrum (as Projprzem) and Atrem, which have significantly improved their results since then.

The Immobile capital group is a Bydgoszcz conglomerate, listed on the WSE since 2007 (initially as Makrum). It operates in industries such as industry, industrial construction, automation and power engineering, development and hotel industry.