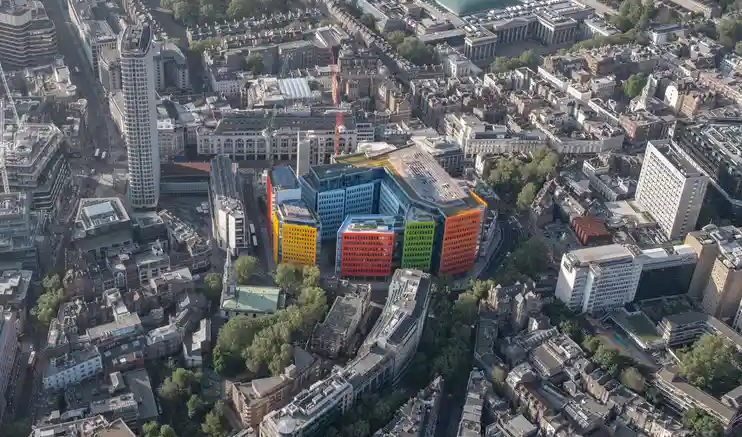 Google has announced a $1bn deal to buy the London development Central Saint Giles, calling the move a show of confidence in the return to more office working.

The US tech firm currently rents space in the brightly coloured development designed by the architect Renzo Piano, which is located in the centre of the capital, near Oxford Street.

The building – with its distinctive red, green, orange and yellow facade – includes 38,000 sqm of office space, as well as more than 100 residential apartments, and is home to restaurants and cafes on the ground floor.

After the purchase, Google will have space for 10,000 employees in the UK, a significant increase on the 6,400 staff it currently has in the country, 700 of whom joined the company over the past year. The company has offices in London and Manchester.

Google’s new London headquarters – a huge horizontal building known as “the landscraper” – is under construction next to the railway lines that run in and out of King’s Cross railway station. The glass building will stretch out by a total of 330 metres, longer than the 310-metre-tall Shard skyscraper.

The main structural works are expected to be finished this year, and once completed it will stand 11 storeys tall, boasting a 25-metre swimming pool, indoor basketball court and massage rooms as well as a roof garden.

Google is also promising a multimillion-pound refurbishment of its Central Saint Giles offices to create a post-pandemic workplace that has “parity” to its King’s Cross base. Desks will be more spaced out, and the redeveloped building will include additional meeting rooms and covered outdoor working areas.