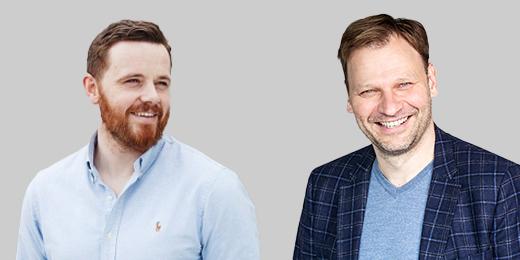 Important organisational changes are taking place within the HB Reavis company, as two new members have been appointed to the Executive Management. The current reinforced composition ensures both delivery of the projects in priority markets and the fulfilment of our strategy to become the international workspace provider of choice.

Marcel established the company’s presence in Germany 5 years ago with the very first acquisition – DSTRCT.Berlin, which is now fully completed, and assured future grown with other projects in the German pipeline, such as the recently announced PLTFRM.Berlin.

Marcel joined HB Reavis more than 20 years ago, and before Germany, he was a part of all the company’s significant milestones, entering new markets in his role as Chief Investment Officer, as well as being a member of the Executive Management from 2010 – 2017.

Steven Skinner will join Marcel as a member of the Executive Management.
Steven joined HB Reavis in 2017 as Transactional Director and was responsible for developing the UK business and leading teams through acquisitions, leasing, financing, asset management and marketing.

Steven will build on his previous expertise and achievements and will continue with his responsibilities as CEO for the UK market, where HB Reavis recently started the construction of the 5th project – the net zero carbon Worship Square. In addition, company is preparing for another project that will significantly affect the look and life of a well-known part of the city – One Waterloo.

What’s more, he will oversee the area of development and product design for all the countries where HB Reavis operates from his new position as a member of the Executive Management.

Germany in the Hands of Robert Kubinsky
Robert Kubinsky, the current CEO for Hungary, will take over the operation in Germany from Marcel Sedlak and will continue to strengthen the company’s position with the new projects in the German pipeline. Robert will build on his more than 10 years’ experience at HB Reavis, which he gained by managing the Hungarian operations and previously overseeing HR and finance areas from the group level.

The current composition of the Executive Management and Senior Management will allow to deliver ambitious goals thanks to the support provided by the expertise and knowledge of its members, which bring direct experience from Poland, Germany and the UK, where the company focuses its efforts, especially in the area of development. At the same time, having a presence in all 6 markets where HB Reavis manages its portfolio under the new HB Reavis Investments entity allows to provide clients with exceptional workspaces with services such as More, HubHub, Qubes, Origameo and Symbiosy.