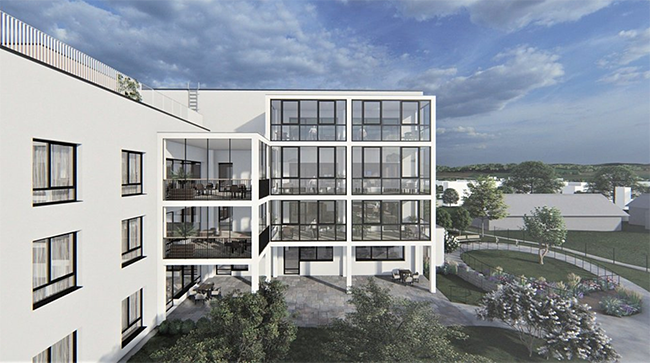 A private facility with 120 beds will be built in Horažďovice, which has been trying to build the necessary home for the elderly for 18 years. SeniorCentrum will be built and operated by SeneCura, the largest non-governmental provider of residential social services in the Czech Republic. His representatives yesterday signed a contract with the city. Construction will probably begin in the spring of next year, and the first clients will probably move in by the end of the summer of 2023.

The three-storey building will be built on vacant city land in the back of the complex, which houses a regional hospital with LDN. After the approval, SeneCura will buy the land. "I think the symbiosis will work because the hospital now has problems with social beds and the people lying on them could be in a new home," said Mayor Michael Forman (Citizens of HD). There will be about 80 beds for seniors requiring a special regime, ie with Alzheimer's disease or another form of dementia, which is increasing. The rest will be ordinary senior beds.

"We have long lacked facilities in the area of ​​residential social services in Horažďovice and its surroundings," said Deputy Mayor Hana Kalná (Citizens of HD). According to her, all beds will be included in the regional subsidy network and clients will pay the same amount as in other facilities in the Pilsen region.

"Specific for Horažďovice will be the arrangement in the form of households, where the common space is inhabited by a group of clients who know each other," said SeneCury CEO Dita Chrastilová. "These will be single and double rooms with their own bathroom," added development manager Ondřej Plšek. The Senior Center will also have a chapel, hairdresser, wellness and fitness center, therapeutic garden and shared terraces. Everything will be accessible to seniors who will not be residents of the center.

"This is actually the first facility in the Pilsen region created on the basis of cooperation between a private company and the state. The Senior Centers in Telč and Chotěboř already operate on the same principle," said Jana Barčáková, SeneCura's media representative. According to her, SeniorCentrum will also create dozens of new jobs for nurses, nurses, cooks, cooks and other staff. Forman estimated their number at 60.

The city previously had its own home project, building permit, contractor and pre-negotiated loan. However, the costs amounted to CZK 230 million three years ago and the deputies eventually canceled the competition. SeneCura did not use the city project, it has its own standardized and verified. "They say they want to do it for CZK 150 to 180 million. It's realistic because they will have significantly less space. They don't need as many offices, they have central human resources, accounting and shopping, and from experience they deal with doctor, nurse, service and rehabilitation facilities differently," Mayor Forman added.