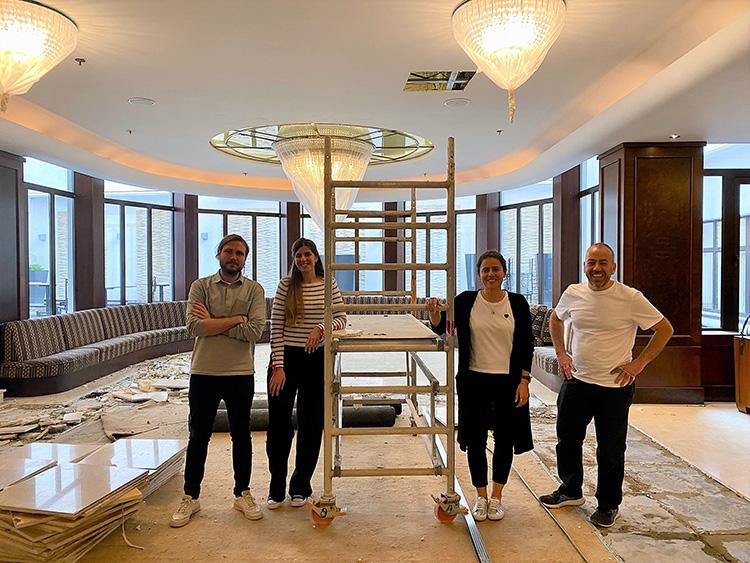 The renovation of one of Prague's most famous icons, the Alcron Hotel, opens a new stage in this prestigious building. After the completion of the works, which is planned for the end of this year, the hotel will bear a new name: Almanac X Prague. The WSF Group and the Wiener Städtische Versicherung bought it together with the adjoining building as early as 1995. Almost a quarter of a century later, its identity is changing to reflect current European design standards, combining luxury with a cosmopolitan lifestyle.

On the one hand, the new interior concept respects the famous past of this building, but at the same time it transforms it into a luxury lifestyle hotel reflecting current trends in the hotel industry. The concept was prepared by the Spanish studio Tres Cinco Uno Creative Studio in close cooperation with the domestic architectural firm Marani Architects and the internal architects of the WSF Group, led by co-owner and architect Tina Haselbacher. The design of the new design began in July 2020. The intention of Tres Cinco Uno was to bring the original interior style of contemporary European design into the new identity of the hotel while respecting and preserving the original unique elements. Studio Marani Architects then played an important role in coordinating the design with local authorities and the subsequent approval process.

Studio Tres Cinco Uno was founded in 2018 by a talented pair of architects - Pablo Poblet and Carlos Carrillo. Both have extensive experience in designing hotels and prestigious restaurants both at home and abroad, such as in France, Mexico and Portugal.

The new design naturally integrates the historical elements of the Art Deco style into a modern minimalist character inspired by Prague itself. As an example, we can mention the characteristic color palette that can be seen on the facades and roofs of historic buildings throughout the city. The designers were looking for a way to elegantly combine this interesting element with the original style of the building, but in the end they managed to use it in several imaginative details - in the lobby and restaurant they decided to keep the unique marble, wood paneling and the original fireplace; brand new design, including a new color scheme.

"In my opinion, Prague is one of the most beautiful cities in Europe. Prague's buildings are very colorful and generally diverse, and they were a great source of inspiration for our new concept. Personally, I was also enchanted by the summer walks along the Vltava River and the adjacent greenery,” said Pablo Poblet from the Tres Cinco Uno creative studio. "We have therefore decided to incorporate this original color range into the new look of the hotel rooms, namely the wall coverings, the wardrobes, the headboards and various fabrics."

The architects were also inspired by the rich history of the building. When Alois Krofta built Alcron in 1932, his vision was influenced in two revolutionary ways. The first was Art Nouveau, which emphasized ornament and elegant natural shapes, while the later Bauhaus emphasized minimalism, clever layout design, the use of steel structures and more daylight in interiors. Light was a key element for Krofta's architect in general. On the ground floor of Alcron, he designed a large open entrance hall with windows in the front and back, creating a completely new, unique and completely different concept of public space that organically respected the natural rhythm of the day.

"On the ground floor of the hotel, we decided to return to the original illuminated concept, but we plan to remove the wall that used to separate the hotel lobby and restaurant. The new Almanac X Prague will once again offer an impressive open space filled with daylight from both sides of the building, which will revive the original vision of Alois Krofta,” explains Tina Haselbacher.

The combination of the know-how of the talented Tres Cinco Uno studio, which was born in one of the most progressive design centers in Spain, and the local expertise of Marani Architects together with the architectural management of the hotel owner Tiny Haselbacher brings a new interior concept with contemporary trends in European design and comes the best of the luxury and lifestyle hotel industry. It is also worth noting that the new design makes maximum use of materials from local suppliers. Another important characteristic of the chosen architectural approach is the sober and balanced aesthetics, which emphasizes the historical details of the building.

"The result of the new interior design of Almanac X Prague confirms the benefits of international cooperation," said Tina Haselbacher on behalf of the hotel. "We managed to combine the influence of the Czech environment with the latest international design trends so that the hotel acquires a very distinctive and authentic atmosphere. We look forward to visiting us from Europe and around the world and personally experiencing a new and stylish concept that professes luxury and a modern lifestyle. ”