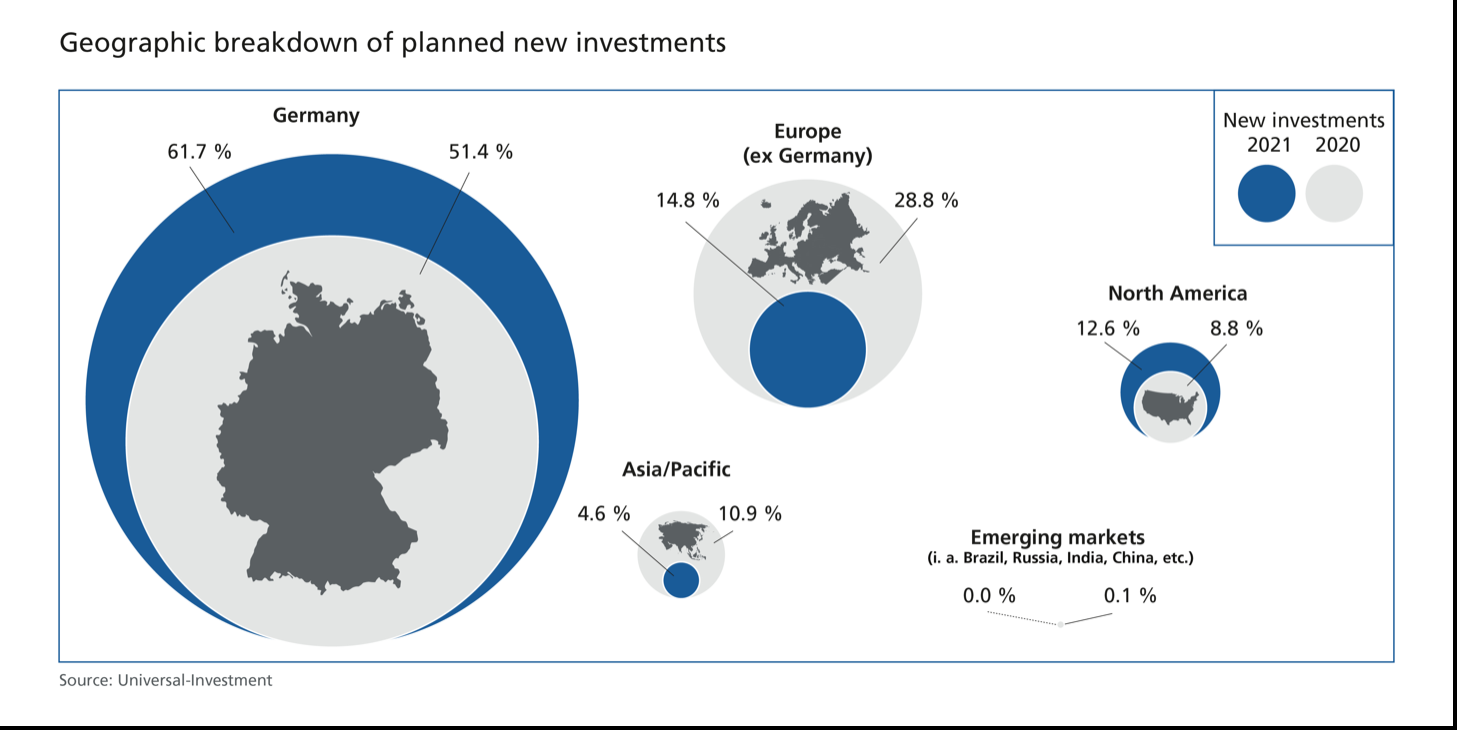 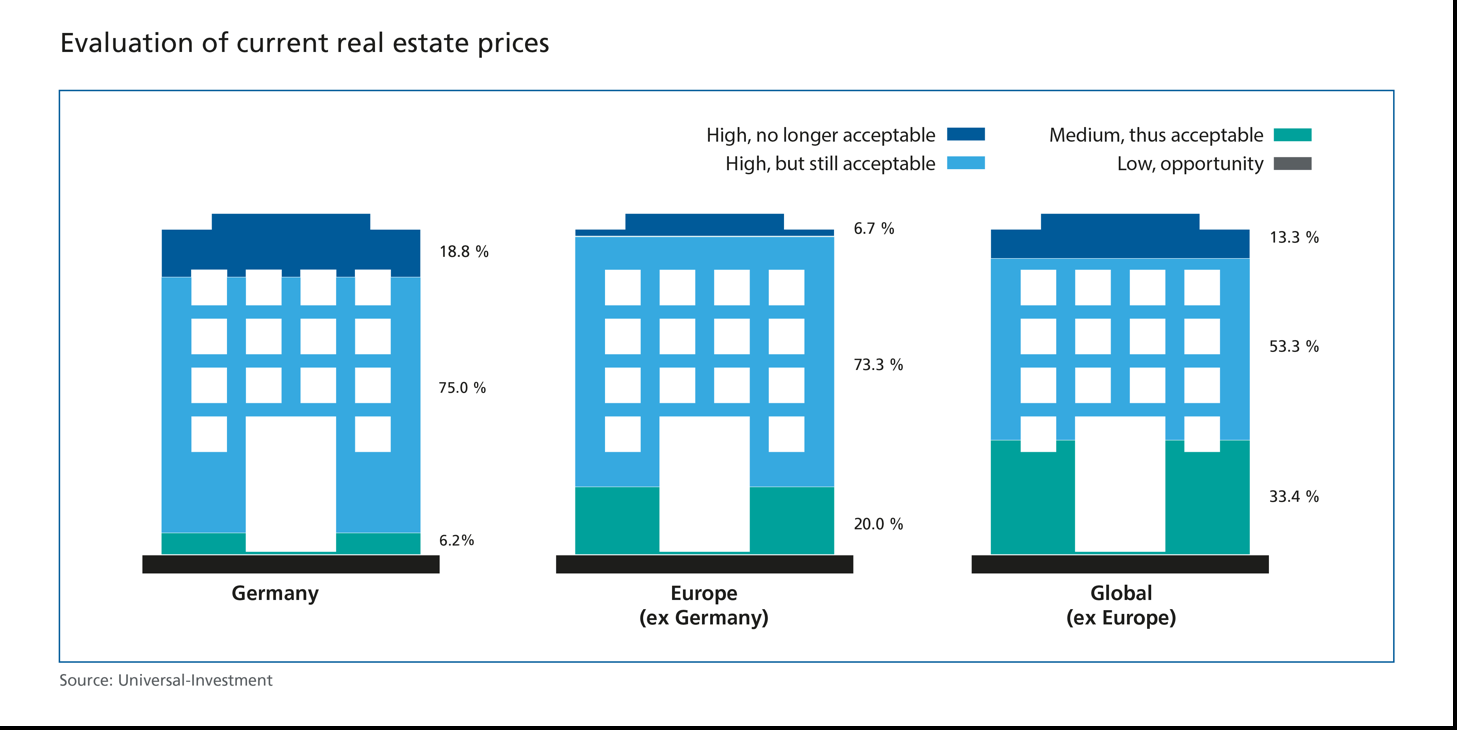 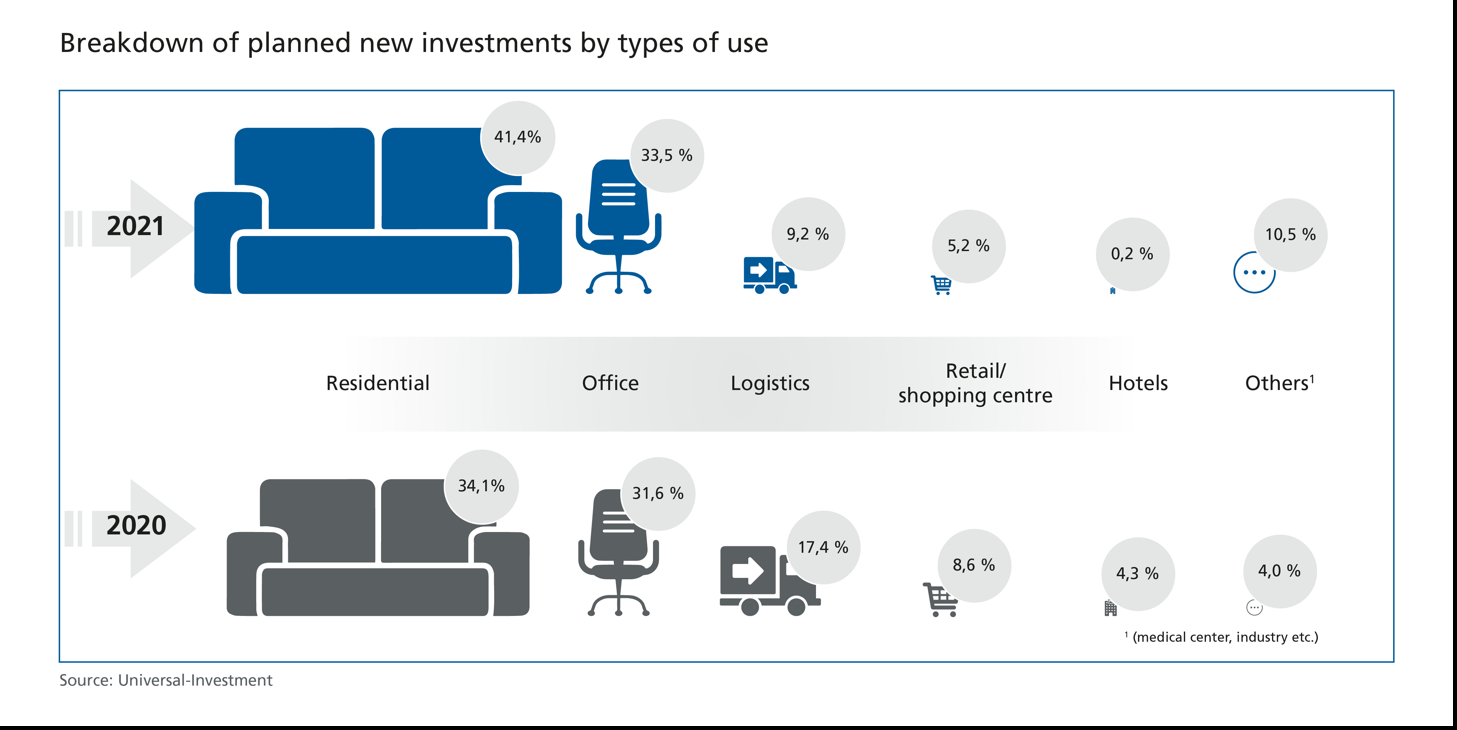 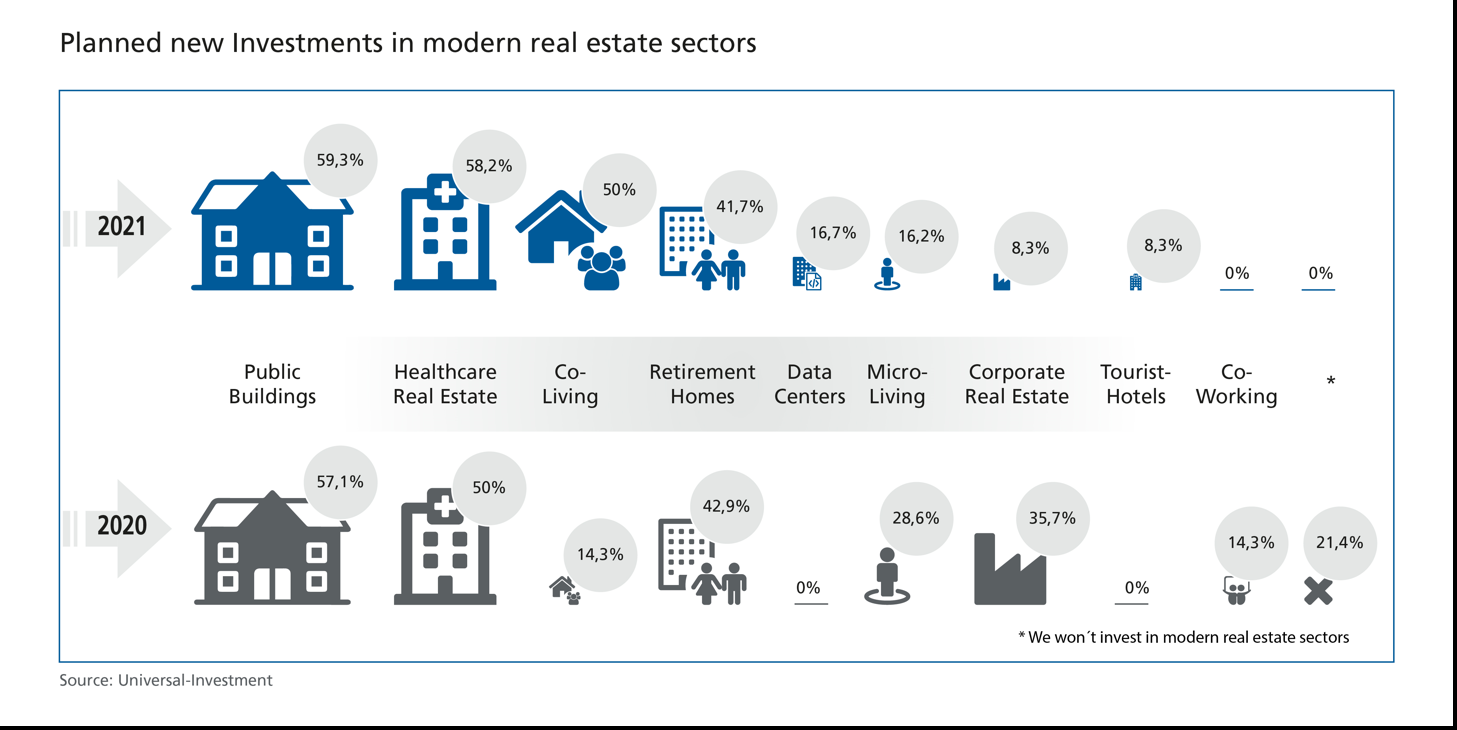 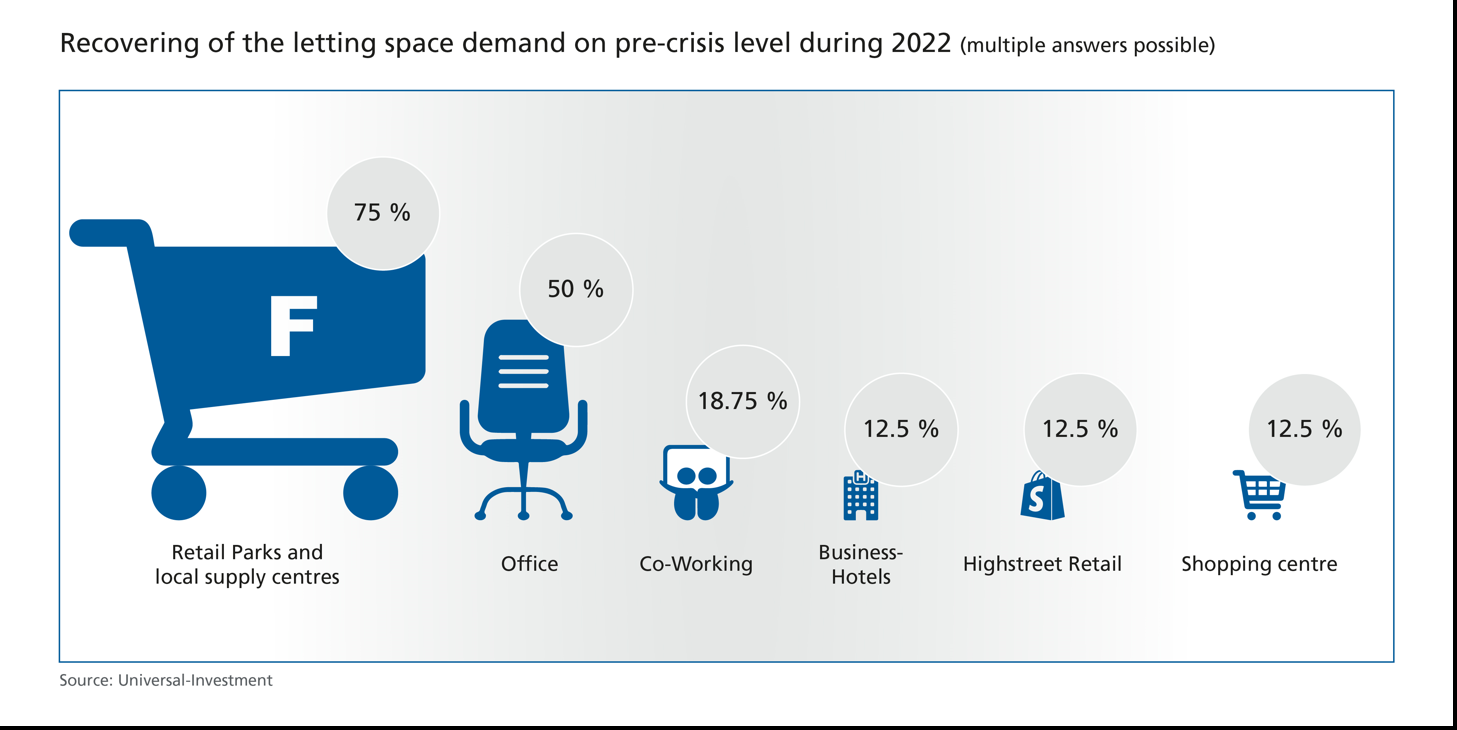 According to a Universal-Investment survey, institutional investors are continuing to invest in real estate for lack of alternatives. The main focus has shifted back to real estate in Germany, but North America is also gaining in importance. Residential real estate is continuing to rise in investors' favour, while retail properties are scarcely featuring in new investments. At the same time, new types of use such as co-living, health care properties and public sector buildings are also in vogue. Investors are increasingly concerned about the development of real estate prices. Many prices are clearly too high and thus no longer acceptable. ESG remains a fundamental issue and is of “great” or “very great” interest to almost all investors. Institutional investors with total assets of around 65.1 billion euros and a real estate portfolio of around 14.8 billion euros took part in this ninth survey.

The majority of investors are looking to increase the share of real estate within their portfolios yet further. The majority of respondents are even planning to raise it to over 20 per cent (22.8 per cent, up from 15.3 per cent in the previous year) – despite the ongoing decline in expected returns. The expectation for the annual distributed interest (cash flow yield) on existing real estate is currently just 3.41 per cent (previous year: 3.58 per cent). For new investments, half of all the respondents expect a net initial yield of below 3 per cent, with only around 23.7 per cent hoping for a value of 3 to 3.5 per cent.

In terms of returns, around 31.3 per cent attach primary importance to the distribution yield, whereas a similarly high proportion of respondents have a preference for the realised total return following the profitable sale of the properties. "Rising real estate rates are a consequence of a market situation in which there are currently very few alternatives in the low-risk investment sector. This is why institutional real estate investors are also accepting lower yields," explains Axel Vespermann, Managing Director of Universal-Investment with responsibility for the Real Estate business segment.

As in the previous year, the survey included questions about the impact of the pandemic. The majority (68.7 per cent) expect to see declining demand for space in certain sectors, including offices and hotels. Around 56.3 per cent report experiencing negative effects on their real estate investments due to slumps in individual sectors, and around 25 per cent fear risks from the overall economic situation. Nevertheless, half of the respondents expect demand for office space to recover to pre-crisis levels by 2022. This figure rises to 75 per cent for retail parks and local shopping centres. Just under 90 per cent of the respondents expect a slower recovery in the shopping centre, business travel hotel and high street retail sectors.

"Alongside residential real estate, local outlets and food retailing have once again shown themselves to be sources of stability in times of crisis. These sectors are almost completely independent of the economic cycle. Other types of use, however, have been hit hard, such as shopping centres and hotels. With regard to the main office sector, the crucial question remains: How quickly will companies return to pre-crisis levels and how high will the demand be?" says Axel Vespermann. "Today, no-one can estimate with any accuracy how many employees will be working from home on a permanent basis in the future, thereby reducing the demand for office space," Vespermann continues.

The majority of those surveyed continue to favour Core properties (46.5 per cent), followed by Core+ (36.9 per cent). This preference has reversed in the space of just one year: twelve months ago, 85.7 were interested in Core+ and only 57.1 per cent in Core real estate. Investors' appetite for risk-taking has also decreased significantly in the “Value-add” and “Opportunistic” sectors. "In real estate, there is currently greater interest in investments which function as anchors of stability than in opportunity aspects," says Vespermann.

Almost 69 per cent of institutional real estate investors feel that ESG is of “great importance”, with just under 19 per cent saying it is of “little importance” and the rest stating it is of “no importance” to them. 69.2 per cent have already implemented their own in-house ESG strategy and 61.5 per cent have appointed an ESG team or an ESG officer. Around 38.5 per cent are now measuring their carbon footprint, and around 31 per cent have implemented initial ESG optimisation measures. The switch to green leases, the issuing of building certification for the entire portfolio or even the use of benchmark and scoring systems such as GRESB remain largely unaddressed. Here there was no significant feedback from respondents.