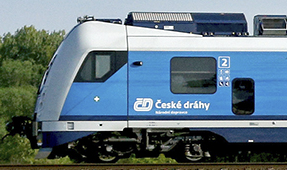 Last year, the Czech Railways Group made a loss of CZK 4.1 billion. This was mainly due to the coronavirus crisis. In the previous five years, the railways made a profit, in 2019 it amounted to CZK 1.3 billion. The biggest drop in sales last year affected passenger transport, where the number of passengers fell by a third to almost 118 million. However, freight transport and other subsidiaries in the group also ended up in a loss. This was announced today by Czech Railways.

The biggest problem was the railways last year in passenger transport, for example in the spring the carrier's trains ran only a tenth of the usual number of passengers and well below the normal part of the year. "However, we have always provided basic transport services for citizens and the costs associated with this have not been fully covered by revenues. This is the main reason why passenger transport ended in a loss of almost four billion crowns," said the head of Czech Railways Ivan Bednárik.