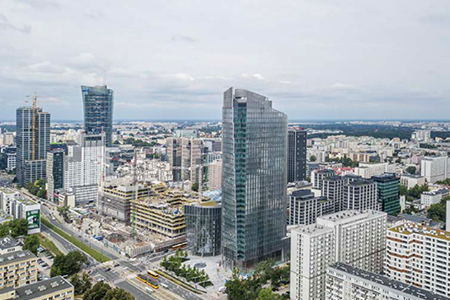 Mennica Polska decided to submit an offer to purchase the remaining 50% of the shares of Mennica Towers GGH MT (which is the direct owner of the Mennica Legacy Tower investment in Warsaw), ensure the repayment of its bonds and purchase of shares in GGH MT through a subsidiary under the name Mennica Polska Spółka Akcyjna Tower SKA, the Mennica reported. The price for the shares, the price for the shares and the bond repayment amount will total EUR 123 million.

Based on the offer of Mennica Polska Spółka Akcyjna Tower S.K.A. (investor)

- will undertake to repay or pay off all registered bonds issued by the SPV belonging to the seller as at the date of the planned conclusion of the contract of sale.

In April, Mennica Tower, a subsidiary of Mennica Polska, agreed on the boundary conditions for the purchase of the remaining 50% of shares in the special purpose vehicle Mennica Towers GGH MT, which is the direct owner of the Mennica Legacy Tower investment in Warsaw, and decided to resume negotiations.

Previously, the Mint conducted negotiations on this issue in November 2020 and ended them in the face of "fundamental discrepancies in the negotiated terms of a potential transaction".

The Mennica Legacy Tower, which is a joint investment of Golub GetHouse and Mennica Polska, received in November last year. valid use permit.

The Mint of Poland, recognized as one of the most technologically advanced mints in the world, is a leading producer of coins and numismatics in Poland and Europe. It is also the only producer of investment gold bars in Poland and a leader in the implementation, service and development of city card systems. Moreover, it carries out development investments in Warsaw. The company has been listed on the WSE since 1998.