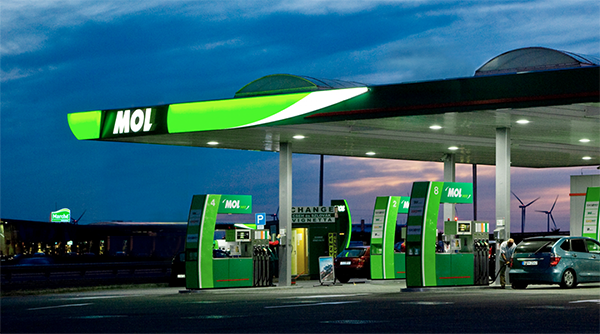 Last year, the MOL Group increased its net profit in the Czech Republic by 9.4 percent year on year to 644.5 million crowns. Revenues from the sale of goods, products and services, on the other hand, fell by 13.9 percent to 38.2 billion crowns. This follows from the company's annual report published in the Collection of Documents. The group operates a total of 304 MOL, Pap Oil and Slovnaft filling stations in the Czech Republic, and is number two in terms of numbers.

For most of 2020, we faced reduced demand for our products, which was caused by the limited functioning of the economy and especially the mobility in the measures of the first spring coronavirus wave. Nevertheless, we managed to surpass the financial results of 2019 MOL Czech Republic, according to executives Richard Austen and Tomáš Griglak.

The Hungarian concern has previously stated that its strategy is to have only one strong MOL brand in the Czech Republic. The existing blue Pap Oil stations are gradually turning green. In a report last year, the company said that the unification of brands should be completed by 2022. Austen, who serves as CEO of MOL Czech Republic, previously estimated that the conversion of pumps will cost the company about half a billion crowns.

After an earlier renaming of Agip, Slovnaft and Lukoil pumps, MOL retained one Slovnaft station in the cadastre of the municipality of Horosedly in Písek in order to preserve the trademark on the Czech market. According to ČTK, the company is also planning a similar step with the Pap Oil brand. The number one in the domestic filling station market is the Benzina Orlen network from the Orlen Unipetrol holding, which has 421 stations. Benzina pumps are also waiting for a name change, the Polish owner of PKN Orlen will gradually rename them to Orlen, the first eight this year.

In its annual report, MOL ČR further stated that by the end of last year, 26 electronic charging devices had been installed and put into operation in its network within the European NEXT-E program. The company plans to continue their installation. "We still see the perspective of the development of charging stations within the main lines, near border crossings and at our stations in cities," said company spokesman Martin Pavlíček.

The company stated that it also continued to build the Fresh Corner refreshment concept at its pumps, expanding it to 220 filling stations last year. "In the area of ​​assortment, we have adjusted the offer of gastronomy so that it is possible to take the offered products with you in compliance with the strictest hygienic regulations," he added.

MOL is an international oil and gas company based in Budapest. MOL ČR states on its website that the parent group owns a network of 1,900 filling stations in 12 countries in Central and Southeastern Europe. The group is active in more than 40 countries and employs 28,000 people worldwide. It operates, among other things, four refineries and two petrochemical plants.