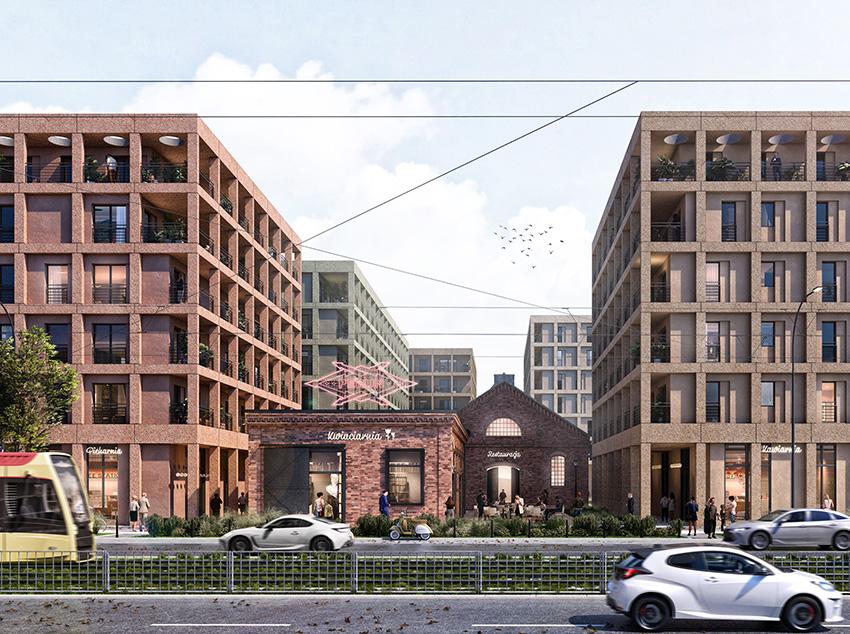 In response to the guidelines of the Mazovian Historic Preservation Officer and the demands made by the community of Warsaw's Kamionek district, architects from the WWAA studio have prepared a new version of the Perun Factory concept. The historic halls are now even better exposed, and the entire project has been reconsidered in terms of the needs of future residents and neighbors. More details were also worked out about the accompanying investment - an attractive green square between Grochowska Street and Elekcyjna Blonia.
This is the next stage of the dialogue on the investment planned under the provisions of the housing speculative law on the site of the former plant of the "Perun" Joint Stock Society of Oxygen and Apparatus Factories. Compared to the concept presented in July, the overhanging of the new residential development over the former factory halls has been replaced by its dispersal, with a clear distinction between the old and modern fabric.
"Since the beginning of the design work on the Perun Factory, we have been consulting with the preservation services. We currently have formal recommendations from the Office of the Mazovian Provincial Conservator of Monuments, which refer to the urban layout and key architectural solutions. In the current design, we have also taken into account the demands of the social side regarding, for example, the number of parking spaces and the nature of the commercial premises - now more oriented to meet the needs of the local community," says Maciej Wandzel, co-investor of the Perun Factory.

Monuments more visible.
The priority of the investor and the architects remains the revitalization and proper exposure of the four historic red brick buildings that will house the service units. In line with earlier declarations, the historic halls will be restored, preserving the original elements, gantries, details and decorations.

"Our current proposal calls for, among other things, approximately five-meter high arcades for some of the new buildings, so that the historic structures will be clearly visible from different directions. In turn, we have planned the new residential development on a rectangular plan, in places referring to the successive stages of Perun's development in its industrial past. This solution will create a network of intimate streets, inviting people to explore the publicly accessible area from different directions," comments Mateusz Świętorzecki of WWAA studio.

New green square.
One of the places from which the historic halls will be perfectly visible may become a public square located on the western side of the development, between Grochowska and Stanisława Augusta streets. The investor of the Perun Factory plans to thoroughly revitalize and donate to the city this currently neglected area of almost half a hectare. The square is being designed jointly by the WWAA and Kwiatozbiory studios.

"Our idea for this place is to create three differentiated zones. On the Grochowska side, the square would have a typically urban character, then it would turn into an open space with a flower meadow or lawn, and closest to Stanisława Augusta Street there would be two playgrounds - a public one and one belonging to the educational premises in the Perun Factory, which will be transferred to the resources of the Praga-Południe district," explains Mateusz Świętorzecki.

In the case of the Perun Factory development, the developer will also participate in improving the quality of the road system in the area, including solutions for pedestrians and cyclists.

Functional architecture with local context.
A distinctive spatial element of the seven new buildings at Fabryka Perun is the use of a concrete façade grid, which alludes to the industrial heritage of Warsaw's Kamionek district. This solution will give the facades a rhythm characteristic of the neighborhood, while also creating additional recreational space for the apartments, in the form of loggias and balconies.

"We want the new and historic buildings, physically clearly separated from each other, to have a common denominator. To avoid the impression of a monolithic development, the color scheme and details of the lattice finishes will be different for each building. However, the color palette will always relate to the historic buildings on or adjacent to the Peruna site. A treatment that will allow the new buildings to better fit into the local context is also to increase the height of the first floors, making them visually equal to the first floors of the surrounding tenements." says Marcin Mostafa of the WWAA studio.

The dimensions of the planned buildings, most of which are 5 or 6 stories or more, have also been adjusted to the heights of the neighboring existing tenements.

The latest concept for the Perun Factory development calls for the creation of some 285 apartments. Approximately 2,800 square meters of space has been allocated for about 20 retail and service units. A single-level underground parking garage will be built under most of the development.

History of Perun
The Perun factory is one of the oldest examples of industrial architecture in Grochow. Since 1913, the plant of the "Perun" Joint-Stock Society of Oxygen and Apparatus Factories - the first factory in Poland to produce modern welding equipment - operated here dynamically. The factory's buildings survived both world wars, and the factory itself, undergoing successive ownership and spatial transformations, continued to operate and develop until the early 21st century.