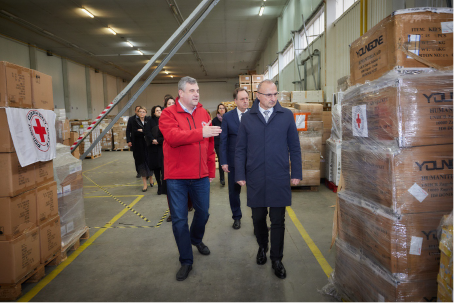 From the left: Michał Mikołajczyk, Member of the Main Board of the Polish Red Cross; Tomislav Vidošević, Croatian Ambassador; Gordan Grlić Radman, Minister of Foreign Affairs of Croatia.

The Masovian District Branch of the Polish Red Cross moved into a warehouse in the City Point Targówek facility, which Peakside Capital Advisors and Partners Group gave to the organization for use free of charge. PCK currently has 2,400 sqm of logistics space at its disposal in Warsaw's Targówek. Preparatory work is underway to double the transferred area.

Gifts from Poland and abroad are successively delivered to the PCK warehouse. Last week, help was received from the Croatian Red Cross, while on April 8, 2022, the warehouse was visited by a Croatian delegation consisting of the Croatian Minister of Foreign Affairs, Gordan Grlić Radman, and the Croatian Ambassador, Tomislav Vidošević, accompanied by the Vice-President of Warsaw, Michał Olszewski, Michał Mikołajczyk, Member of the Main Board Polish Red Cross and representatives of Peakside Capital Advisors: Roman Skowroński Managing Director and Bożena Kaczanowska-Tajan, Asset Manager.

Roman Skowroński, Managing Director of Peakside Capital Advisors in Poland, comments, "As we have available resources, we have decided to provide free warehouse space to the Mazovian branch of the Polish Red Cross. We are glad that the donated space is being used to help refugees from Ukraine. We want to engage in further assistance and we are talking to the Polish Red Cross about specific targeted activities in which we could engage."

"The support of Peakside Capital Advisors and Partners Group for our organization is invaluable. Thanks to the warehouse space provided, we can provide long-term assistance to people from Ukraine in Warsaw and plan humanitarian transports to Ukraine," said Honorata Krzywoń, Director of the Mazovian Regional Branch of the Polish Red Cross in Warsaw.

City Point Targówek is located at ul. Matuszewska 14 in the Warsaw district of Targówek.