Prague Ministry of Culture decided against the reconstruction of Savarin 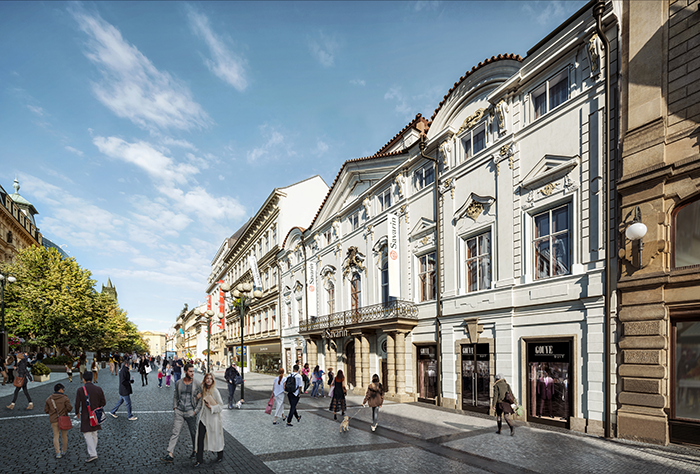 The Ministry of Culture has rejected the reconstruction of the Savarin Palace near Wenceslas Square in Prague, which was to cost ten billion crowns. The capital approved the project, but according to ministerial conservationists, it would endanger the monument reserve. The development group Crestyl, which owns the property, said that it had asked the Minister of Culture Martin Bax (ODS) for a review and modified the project to match the comments of the ministerial conservationists compared to the original several-year-old version. Among other things, the Slavic epic by Alfons Mucha was to be exhibited in the palace.

Savarin Palace, also called Sylva-Taroucca or Piccolomini, is a late Baroque palace building. The rebuilt complex was to have an area of ​​1.7 hectares and, when completed, to connect Wenceslas Square with Na Příkopě, Jindřišská and Panská streets. In the courtyard, for example, a market, a restaurant or a space for social and cultural events are planned.

The agreement on the location of the Slavic Epic in Savarin was signed in February this year by representatives of the capital, the Mucha Foundation and Crestyl. She was to build the appropriate premises in Savarin for a cycle of 20 canvases. The draft agreement was approved by Prague councilors on January 31.

The properties are owned through the Czech companies Welwyn Company and Savarin HoldCo, a company registered in Malta, Savarin P.l.c., which is controlled by the development group Crestyl. According to media representative Ondřej Micky, the project has two parts, the first of which concerns the reconstruction of the historic palace, which already has a building permit and began last year. The second part, consisting of modifications and reconstruction of the courtyard, is now in the permitting process and concerns the decision of the ministry.

In its March decision, the ministry reversed the original positive opinion of the town hall conservationists from 2017, which is crucial for the construction. Ministry spokeswoman Ivana Awwadová confirmed that the project of the reconstruction of the courtyard created by the study of the architect Jakub Cigler is "from the point of view of state monument care completely unacceptable in the long run".

However, Mick said the project already included a number of adjustments requested by the Ministry of Culture. "That is why we have already asked the Minister of Culture to review the decision of his ministry. We are now waiting for his statement," he said.

He added that the company invited the studio of the London architect Thomas Heatherwick to make the modifications in 2019, and the current project is thus different from the one covered by the issued decision. "He has already received positive opinions both at the Municipal Department of Monument Care and from the National Monuments Institute and has support at the Institute of Planning and Development of the Capital City of Prague and the management of Prague 1 and the municipality. it has no effect on the implementation of the project," said the spokesman.

Petra Hrušová from the press department of the ministry subsequently confirmed that the negative opinion concerns the original version of the project. "The Ministry of Culture has commented negatively on J. Cigler's originally proposed project in the construction proceedings, which is now being discussed in the appeal proceedings," she said, adding that according to the amended project, the ministry did not rule out conversion.

Prague plans to place the cycle of paintings Slavonic Epic in the reconstructed premises. According to the agreement signed and approved by the capital's representatives, the paintings should be exhibited for 25 years after the reconstruction in Savarin, with the option to extend the lease for another five years. The city will pay Crestyl for the lease of the premises, for the total lease period the amount is based on hundreds of millions of crowns. This was criticized by the granddaughter of the famous painter Jaroslav Mucha Plocková. According to her, the city should use its own building, such as the reconstructed Industrial Palace. According to her, it is undignified that the paintings should be located in the underground premises of the commercial center. The canvases are now on display at the castle in Moravský Krumlov, where the city lent them until the end of 2026.

Savarin Palace is located next to Wenceslas Square. The new appearance of the palace is to connect its courtyard with Na Příkopě, Jindřiška and Panská streets. The project includes the reconstruction of existing historic buildings and the creation of a new public space with greenery, open space in the courtyard and commercial areas. It consists of four interconnected separate parts, each of which will have a different character and use according to the company's information. Last year, the Crestyl Group issued bonds worth 2.2 billion crowns to finance the project.