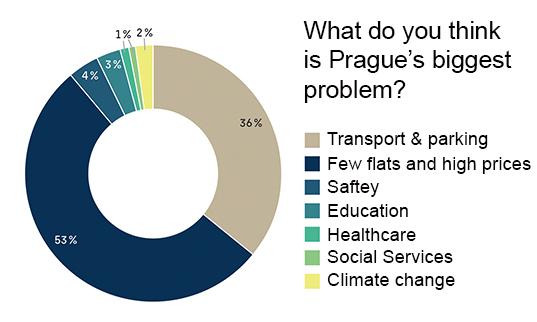 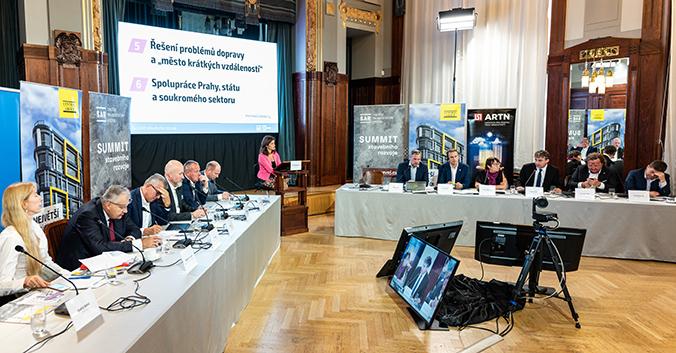 Supporting building development and solving the housing crisis are key tasks for Prague and the entire Czech Republic. The participants of the big autumn Building Development Summit with the debate of the candidates for the new mayor of Prague in the Municipal House agreed on the need to permit and build apartments more quickly. If the permitting process is accelerated, the prices of new apartments can be lower by up to 15%.

More than half of Prague residents (53%) consider the lack of apartments and high housing prices to be the biggest problem in Prague. This was shown by a large public opinion survey carried out through the Instant Research application of the agency Ipsos from the beginning of September. It was attended by 1,000 respondents from Prague. People cited transport and parking as the second biggest problem (36%), followed by safety (4%), education (3%) or climate change (2%).

"It's not a big surprise, because housing in Prague is the most difficult to access for its residents out of all the surrounding metropolises. Our June Housing Affordability Index shows it. According to him, a Prague citizen would earn 17.3 years on an average new apartment, if he had no other expenses. In Berlin, Vienna or Warsaw, people can afford a new apartment in about 9 years. Compared to Prague, it's almost half the time," says Michaela Tomášková, executive director of the largest residential developer Central Group.

A new construction law and tax adjustment in favor of cities and municipalities are needed:
The only effective solution to the housing crisis is the massive construction of new apartments. But for this, it is necessary to speed up and simplify permitting and allocate enough areas for new construction. The mayoral candidates are also aware of the need to build more. In order for it to be fulfilled, it is necessary to have a new pro-development building law as soon as possible. To solve the housing crisis, it can also help to transfer the permitting of large residential buildings (e.g. buildings over 100 apartments or over 10,000 m² HPP) under the Specialized Building Office.

However, even the best building law is not enough if cities and municipalities do not receive significantly more money from the state for the necessary public infrastructure. Otherwise, it is logical that new construction is often resisted. A suitable solution could be to reduce the VAT on apartments from 15 to 10%, with the remaining 5% being collected directly by the cities and municipalities where they are built (the so-called 10+5 PRINCIPLE).

Faster permitting of apartments = their lower price:
"If permits are issued faster and more construction is done, the prices of new apartments can be lower by up to 15%. There are several reasons. The main thing is that if the approval of a new apartment building in Prague now often takes 10 or more years, this unproductive long-term mortification of large finances in purchased plots of land must of course be reflected by investors in the price of apartments," adds Michaela Tomášková.

Prague needs 10-15,000 flats per year, in the last 10 years only 3 and a half thousand are permitted on average. Excess demand over supply is the main reason for price growth. Since 2015, when prices “took off”, they are up 146%. Compared to the surrounding metropolises, the pace of permits is the slowest in the Czech metropolis. In Warsaw or Vienna, 2.5 to 3 times as many apartments are permitted per thousand inhabitants as in Prague, which is also why housing is more affordable there.

If more is allowed and built on a large scale with the possibility of subsequent stream construction, it is possible to achieve great savings on the volume of construction. With more construction, there is also more supply on the market, and therefore a more competitive environment, which forces developers to maximize productivity and competitive prices.

Sufficient areas are needed for new construction. And develop brownfields
In order for Prague to develop further, it is also necessary to secure enough areas for new construction. The new Metropolitan Plan and other strategic documents must be sufficiently ambitious and plan Prague as a city that provides services for up to 2 million people daily. Until the final approval of the new spatial plan, changes to the existing one should be processed flexibly, when the priority should be transport and residential buildings and construction on brownfields.

Brownfields hide enormous potential. They account for more than 2/3 of all planned apartments in Prague and could provide housing for up to a quarter of a million people. Construction on them also makes sense from the point of view that they are often located in the wider center of the city, where the infrastructure is already built and for the city it is cheaper than construction on a green field. For investors, however, construction on brownfields is much more financially demanding, as it is often an area with a large ecological burden, and some brownfields are economically intractable even for investors due to the necessary demolitions and decontamination from harmful substances in the soil, even if they were completely free. The state should therefore financially support the decontamination and revitalization of brownfields, especially for residential areas. On the one hand, for ecological reasons and also as help in solving the housing crisis.

Brownfields and other unused land owned by the city or the state, or their exchange for apartments from private investors, can also serve as a tool for creating a public fund rental apartments. In addition, it could be created quickly, transparently and without impact on public budgets.