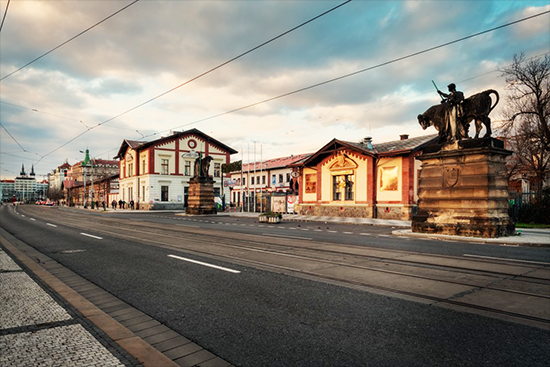 The premises between the buildings in the Prague Market Square in Holešovice will be renovated. The municipality will announce an international architectural and landscape competition for their modification. The aim is to improve their appearance and improve the management of rainwater and greenery will be added to the area. The costs of the competition are estimated at approximately CZK 7.64 million and the estimated duration of the competition is ten months. This follows from a document approved yesterday by Prague councillors.

The competition is to bring the city a proposal that will improve the functionality of the space, sophistication and increase their safety. New furniture will be designed, ie the location of benches and baskets. "It is necessary to strengthen the emphasis on contemporary landscape solutions, to examine the possibilities of maximum involvement of greenery, rainwater management," according to a press release. The final design will also work with the design of the planned renovation of the infrastructure and reconstruction of the market buildings.

"We want to get the best possible solutions for public spaces resulting from an international competition, in which we will take into account the wishes of Praguers from questionnaires and local research. We hope that as many domestic and foreign studios will apply. We will announce the winner in March next year," said the deputy mayor. Pavel Vyhnánek.

The city is investing two to three billion crowns in the repair of the Prague Market in Holešovice over the next 15 years. The area is to fulfill its cultural, commercial and gastronomic function. There will also be offices, a supermarket and a lookout tower. The possibility of entry will be expanded, new greenery will be planted and rainwater will be collected in underground reservoirs.

The area of ​​the original Prague slaughterhouse was founded in 1895. It functioned as a slaughterhouse until the 1980s, when it began to change into a market. The area has been declared a cultural monument.