Revitalising the HOP, or how to turn an old office building into a new one 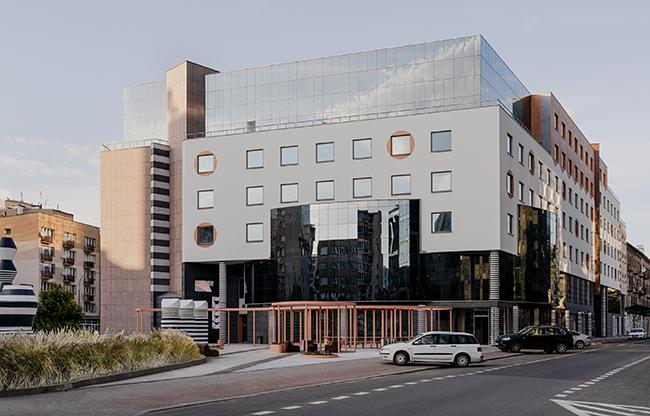 Modern office space, openness to tenants and residents, distinctive design, attention to ESG factors, and a great location in the heart of the capital city at Chmielna Street. All this is combined in the HOP, a post-modern office building from the 1990s which has undergone a thorough upgrade thanks to Syrena Real Estate. The process lasted nearly a year and reached completion with the opening of the Lupo Pasta Fresca restaurant by acclaimed Warsaw restaurateur Justyna Kosmala, owner of Charlotte and the Wozownia Bar. The office building has also recently obtained the BREEAM in Use certificate at the EXCELLENT level and Barrier-Free Facility awarded by the Integration Foundation. The HOP is the first of two development projects in Syrena RE’s portfolio with PineBridge Benson Elliott to undergo such transformation. Work on the other project, the Marynarska Business Park, is underway.

The HOP (formerly Aktyn) is a typical post-modern building from 1996. It was one of the first modern office buildings in Warsaw, an icon of freedom and economic change. It housed the headquarters of the Bank Przemysłowo-Handlowy. Over the years, like other investments from that period, it ceased to meet the contemporary requirements of the rapidly changing commercial real estate market and the expectations of tenants. Syrena Real Estate decided to give a second life to the building and integrate it into the existing urban fabric while preserving its post-modern character and style, appreciated worldwide and increasingly popular also in Poland. The Reesco Group was responsible for the redevelopment.

“The transformation of office buildings dating back to the last decade of the 20th century is a trend which unveils the potential of postmodern buildings and redefines contemporary office reality. We want to be at the forefront of that trend, and the HOP is our first flagship development. Before the modernisation, it was an unremarkable building from the era of economic transition, and it virtually disappeared. It could have been demolished like many other buildings of its kind. However, we decided to bring it back to life by highlighting its post-modern architecture and adapting it to the requirements of the post-pandemic work systems,” said Witold Zatoński, Managing Partner at Syrena Real Estate. “The HOP is changing the perception of buildings dating back to the period of economic transition in Poland, and it sets a new direction and defines a new way of thinking about friendly office space. We are working on other transformations of properties in Warsaw to adapt them to the modern expectations of tenants, including sustainable development. The essence of our proprietary concept is to make office buildings into connectors where tenants’ space mingles with common areas and the outside world, and to respect the existing architectural substance by reinterpreting and improving it. At this time, the work is most advanced at the Marynarska Business Park office complex.”

The new HOP building has been designed by Anna Łoskiewicz of Łoskiewicz Studio, previously known locally and internationally for her award-winning Beza Projekt studio. The façade of the office building is decorated with geometric patterns characteristic of postmodernism, as well as stripes covered with copper paint which hint at the colour of the brick walls of pre-war tenements. In front of the entrance to the building, at the exit to the underground car park, there are totems and sculptures painted with white and black stripes. The car park itself is designed in the same style in warm copper colours with black and white elements. The warm brown and copper tones of the interior correspond with the façade. The designer has chosen to highlight the most characteristic elements of the office building, such as the beautiful green marble. The HOP’s main lobby underwent the biggest transformation with the addition of a spectacular staircase that forms an agora of the building. The space has been opened up to meet the needs of employees and visitors to the building. The entire ground floor is filled with designer furniture in curved shapes, soft fabrics, distinctive colours and designs. The interiors also feature stone and terrazzo. The building not only offers modern office space and conference rooms but also sets new trends which put people, their needs and comfort at the centre.

The HOP’s entire space has been designed to be open and flexible and to offer personalised solutions for every working style, from a large 1,000 sqm coworking area to quiet and peaceful rooms fit for individual work or business meetings. With its focus on openness, the HOP is open not only to employees but also to the city’s residents. Its distinguishing feature is the carefully designed common space available to every visitor and not restricted by access gates. The square in front of the 600 sqm office building has also been given a new look. New greenery and flower meadow have been planted here, and rest and relaxation spots are arranged in an eye-catching copper construction. The office building also includes one unique space, an apartment located on the top floor of the building. It will be used as an art space arranged in cooperation with culturalinstitutions.

The upgrade of the HOP paid special attention to ESG factors. The HOP is one of few facilities in Warsaw with as many as 10 fast-charging bays for electric and hybrid vehicles, and the upgrade has made it possible to adapt the entire car park to car charging. Enthusiasts of ecological transport can also use a bicycle car park for 100 bikes and infrastructure dedicated to cyclists: locker rooms and showers. The high-quality modernization of the building is confirmed by the recently obtained BREEAM in Use certificates at the EXCELLENT level and Barrier-Free Facility awarded by the Integration Foundation, which means that it meets the requirements of architectural accessibility and is adapted to the needs of people with various types of disabilities. The office building is currently in the process of being certified by WELL, and WELL Health and Safety Rating.

The group of tenants of the modernised HOP has expanded in recent weeks with the Lupo Pasta Fresca restaurant, which took up 450 sqm of space on the ground floor of the building. Just like the entire new concept of the office building, the interior of the restaurant has been designed by Anna Łoskiewicz. The Lupo is divided into zones and features small rooms with different décor which can be individually arranged for closed private or business events. The restaurant serves top-quality Italian cuisine, mainly various types of pasta made daily on site from Italian ingredients. It offers breakfast and lunch early in the day, an aperitivo with snacks in the afternoon, and a dinner menu in the evening. The place has been arranged in the Memphis style, characterized by asymmetrical combinations of geometric shapes and the free combination of various materials. The interior is decorated with designer lamps, white sofas, an onyx counter, and a coffee bar with a tiled top.

The HOP office building offers a total of more than 14,000 sqm of leasable space, including 13,000 sqm of offices and workspaces. The commercialisation status of the building is 93%. The HOP houses the offices of 4Life Direct Polska, BNP Paribas, CMT Construction Management Team, the Institute of Environmental Protection – National Research Institute (PIB), and others. The building has six above-ground storeys and one underground storey with a car park with 94 parking spaces.