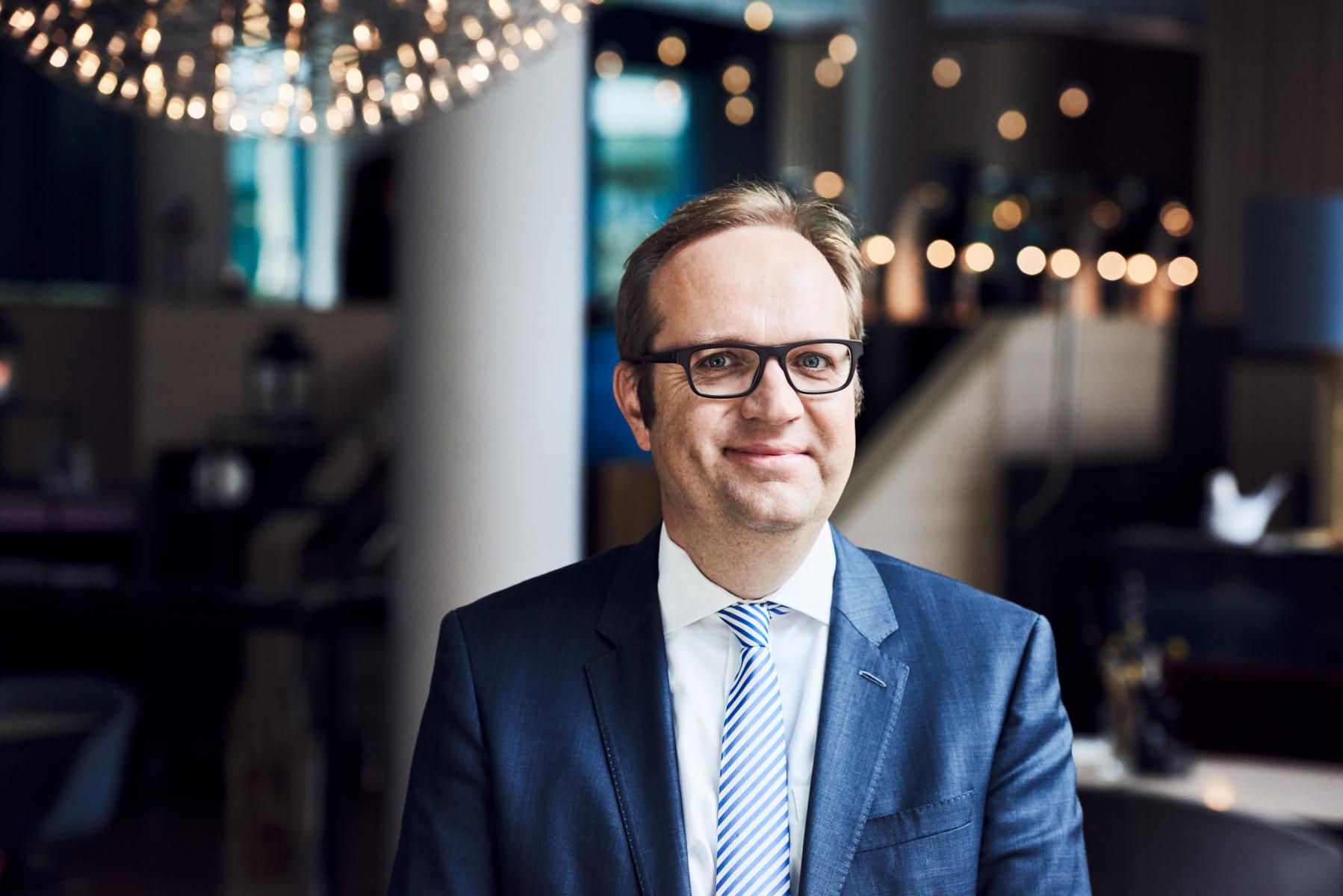 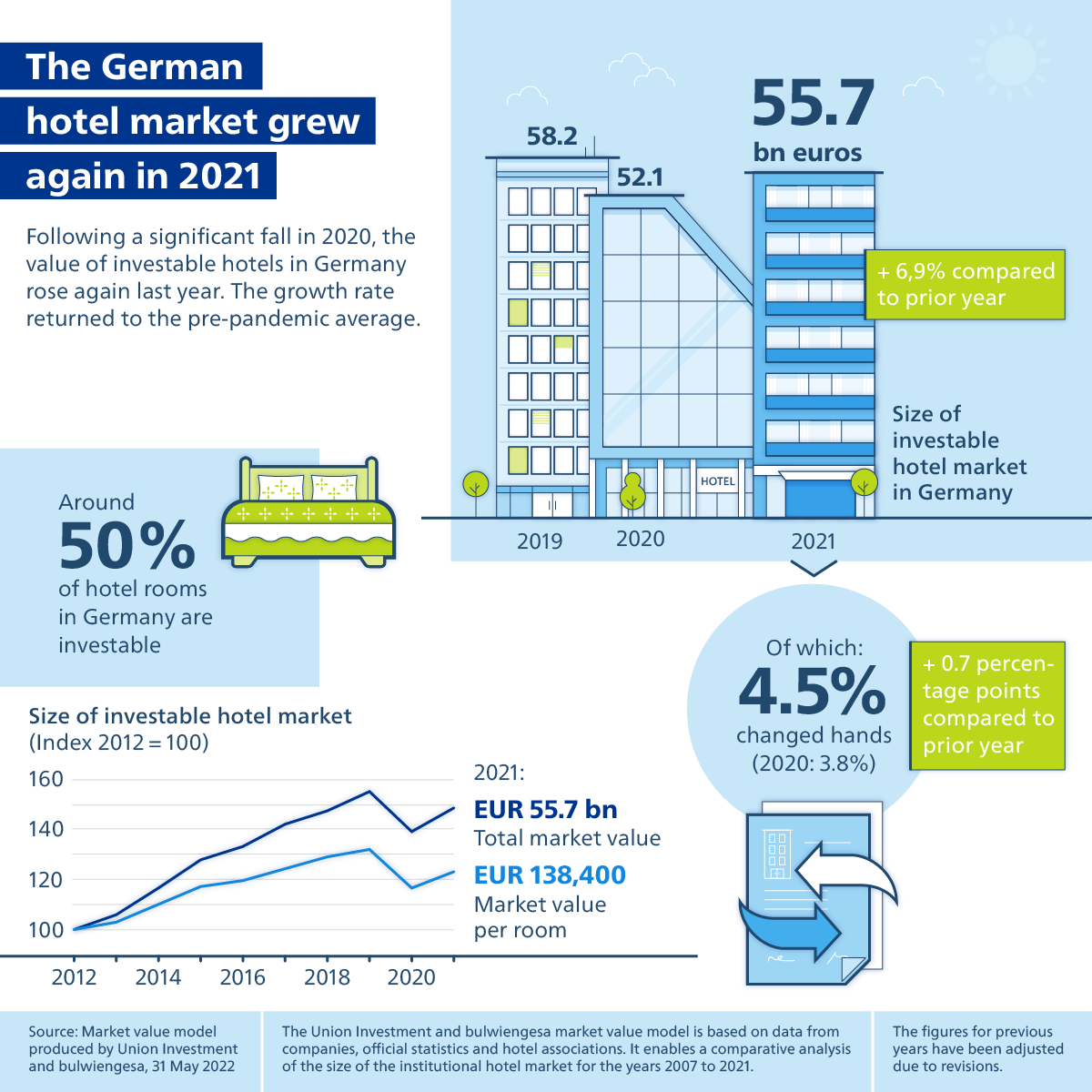 Following a significant fall in 2020, the value of investable hotels in Germany rose again last year. According to calculations by Union Investment and bulwiengesa, the institutional German hotel market was worth EUR 55.7 billion at the end of 2021, representing a rise of 6.9 per cent over the revised figure for the previous year (EUR 52.1 billion). “The growth rate has returned to the pre-pandemic average. There are encouraging signs of recovery in the German hotel market, with above-average growth in segments that are traditionally considered more crisis-resilient, in the budget/economy segment, in branded hotels and also among operator models such as serviced apartments,” said Andreas Löcher, head of Investment Management Hospitality at Union Investment.

In addition to the increased number of new, often branded hotels and serviced apartments, a key driver of growth is institutional investors’ strong interest in properties outside the major German cities. “Around half of all hotel rooms in Germany are now on the radar of institutional investors,” said Dierk Freitag, partner at bulwiengesa AG. There is still a reluctance to buy, however, because the situation in the hotel industry remains difficult. Escalating operating costs and staff shortages are causing problems for many hotels, in addition to ongoing low occupancy rates. Geopolitical risks are also delaying the planning and construction of new hotels.

“We expect market values to rise further next year. With construction and financing costs going up, this rise is less likely to result from increases in supply (quantity effect) than in 2021. The increasing economic strength of existing providers (performance effect) will play a greater role, with room rates rising and hotel businesses increasingly becoming more digital and sustainable with fewer staff, while portfolios are more diversified,” said Freitag.

Due to the pandemic, very few hotels performed well in 2021, with RevPAR being significantly below pre-coronavirus levels across Germany. As in the previous year, this had a significant negative impact on the performance of the market. “However, we are seeing a clearly positive trend, which also applies to the hotels in our own portfolio. Both in Germany and abroad, we are therefore looking for hotels with strong brand loyalty, especially in the business hotel segment. We are focusing on two key areas: existing properties with creditworthy operators and sustainable concepts in major cities, and properties in holiday destinations with strong domestic demand,” said Andreas Löcher. European destinations are not expected to start benefiting from international tourism until 2023, given the war in Ukraine.

Market analysis at regional level revealed above-average value increases in cities with under 500,000 inhabitants. Many small and medium-sized towns and holiday regions saw relatively high levels of tourist demand in 2021, which had a positive impact on the local hotel industry. As a result, more hotels are being planned and built in these locations, and existing properties are selling well.

While all segments recorded slight gains, increases were above average in the economy hotel segment (7.2% value increase) because the corresponding providers performed relatively well in 2021 and this market segment expanded more strongly than other segments. In particular, operators B&B and Whitbread/Premier Inn have significantly boosted the size of their hotel portfolios in Germany over the past two years, partly by leasing new properties and also by acquiring existing hotels. The serviced apartments segment, which is considered comparatively crisis proof, also contributed to the overall positive performance.