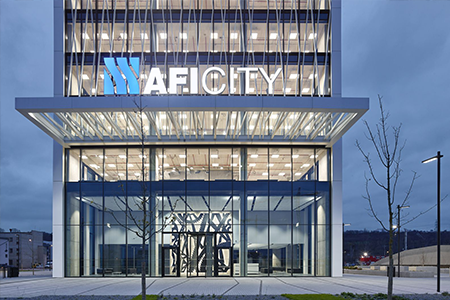 The development company AFI Europe signed a lease agreement with ŠKODA AUTO a.s. It will rent a total of 5 floors with almost 5,000 sqm of space in the first office building in the new AFI City district, which is being built on a large former brownfield site in Prague 9. In addition, ŠKODA AUTO is planning further expansion within the AFI City 1 building. The largest car manufacturer in the Czech Republic will use the space mainly as offices; one entire floor will be reserved for the "42 Prague" educational institute, where up to 450 students should receive qualifications over the next three years. Another new tenant of the AFI City 1 building is the Nussli (CZ) company specializing in interior design and carpentry solutions. It will affect an area of ​​470 sqm. Another 600 m2 in AFI City was leased by the French pharmaceutical company Pierre Fabre, which focuses primarily on dermatology, oncology, angiology and dermocosmetics, which it sells in Czech and Slovak pharmacies under the brands Avène, A-Derma, Klorane and Ducray.

"ŠKODA AUTO is one of the Czech legends - it has long been in the first place in the country in terms of sales, exports and jobs. Its requirements for the working environment of its employees also correspond to this. We therefore consider it a great success that 42 Prague has chosen our building and services for its offices and institute," comments Kateřina Holická, asset manager of AFI Europe, and adds: "We consider 42 Prague Institute to be an innovative project that will support the position of the Czech Republic in the international field in the field of IT. In addition, it fits perfectly into our concept of AFI City as a modern and dynamic district." Institut 42 Prague is the third project belonging to the educational network "École 42" in the Volkswagen Group. This didactic concept focuses mainly on lifelong education and permanent strengthening of social skills. In the future, 150 programmers will graduate here every year. Gamification, peer learning and peer evaluation should become the main pillars of the study.

"According to the latest standards, the office spaces in the AFI City building represent an attractive environment for our employees for modern forms of coworking work. The strategic location in Prague's Vysočany allows for excellent transport accessibility, and at the same time, thanks to the short driving distance from Mladá Boleslav, it is also advantageous for organizing business meetings in Prague. In addition to the "42 Prague" educational institute, AFI City will also be permanently used by our IT and Tech-Hub experts, the company Digiteq, the SAP competence center and others," highlights the advantages of the new premises, Karsten Schnake, member of the ŠKODA AUTO Board of Directors for the area of ​​Purchase.

The elegant office tower AFI City 1, 75 meters high, has become the new dominant feature of the rapidly developing location on the territory of the former industrial area of ​​ČKD Slévárny aMoura in Prague's Vysočany. The revitalization of the 15-hectare brownfield includes a total of 110,000 sqm of office, commercial and accommodation areas, as well as 40,000 sqm of apartments. All 470 apartments have been completed and sold. Currently, there are also two apartment buildings designed exclusively for rental housing, with a total of 640 units. Part of the district is also a large park with an area of ​​7,500 sqm with lots of greenery, a bike path and spaces for spending free time.