The Karlovy Vary Thermal Hotel will open on Friday, but the modernization is not over 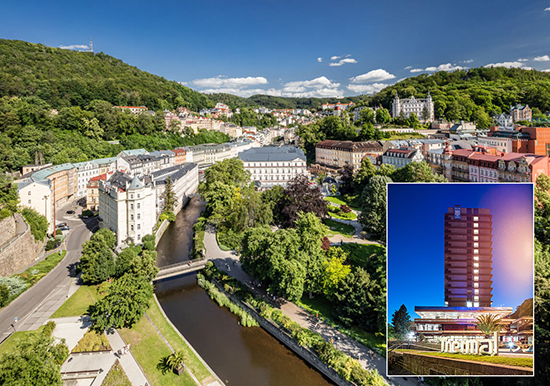 The Karlovy Vary Thermal Hotel will open on Friday, June 25, after extensive reconstruction. However, the modernization of the state hotel will continue in the coming years. However, this will be during the operation of the hotel, the main part of the reconstruction of which cost 580 million crowns and included the exchange of technologies, insulation, modernization of rooms and repair of the devastated swimming pool. However, the gradual renewal should continue in stages, the Minister of Finance Alena Schillerová (for YES) said yesterday.

"We plan to continue the reconstruction and modernization of the hotel until 2025. The next steps that will follow are the modernization of the congress parts, which have undergone a partial modernization in the past, but need to be adapted to the new technical conditions. then the surroundings, the gardens, the adjacent part around the hotel await us. That is still a big task ahead of us, "Schiller described.

The hotel has been closed for eight months due to a coronavirus pandemic. After June 25, two more floors of the hotel should open every two weeks. By the start of the Karlovy Vary International Film Festival at the end of August, 189 rooms should be available and 273 rooms should reach a full level in the autumn.

The renovated pool at the hotel should also open in the first week of August. The swimming pool overlooking the spa center of the city has also been completely renovated. It will now offer two parts, a swimming pool with ordinary heated water and then a special part with spring water. In the past, only about five to ten percent of the spring water was added to the pool. Now the hot spring part of the pool will have 100% hot spring water. It will not be used for swimming, but rather for sitting and drawing on the healing effects of spring water.

The most demanding at the ending reconstruction of the hotel were energy savings. In the hotel from the 70s of the last century, all the windows were replaced, the facade of the hotel was insulated, almost all balconies were replaced, technology changed completely, the rooms will be newly equipped with air conditioning. However, it will now be possible to regulate the heating practically by individual rooms. Overall, energy costs should fall from the current CZK 30 million by half.

According to the director of the hotel, Vladimír Novák, the return of the hotel to operation will be gradual. Reservations for the first days after opening are in the order of room units. The hotel expects a similar development this year as last year, relying on German clients, but also guests from the Czech Republic, who last year made greater use of the opportunity to stay in the hotel. The management of the hotel promises a lot from the opening of the swimming pool, which should be a great attraction not only for locals but also for tourists.

At the time of the closure, the hotel had to dismiss part of the staff due to the coronavirus, and the number of employees decreased from 130 to about 100. According to Novák, the hotel was also helped by state support programs. "We are now recruiting operating staff, which will be difficult in Karlovy Vary. We have recruited temporary workers for the summer and the film festival.