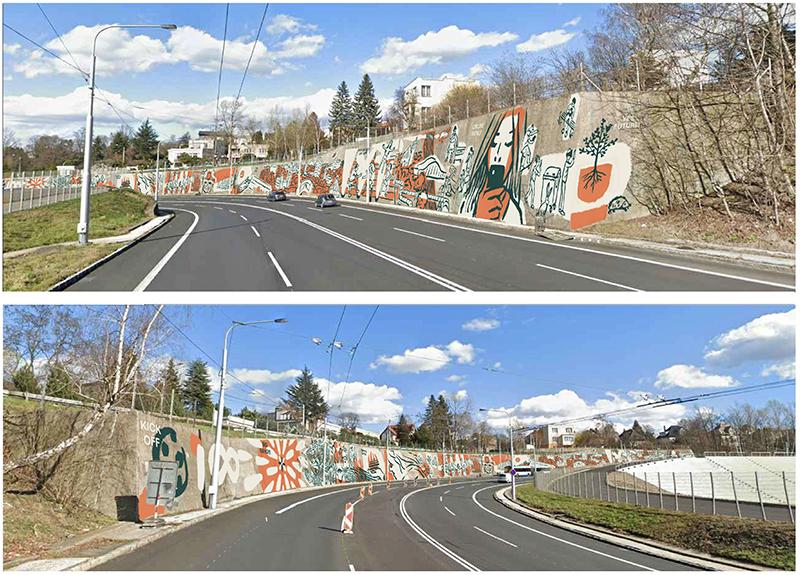 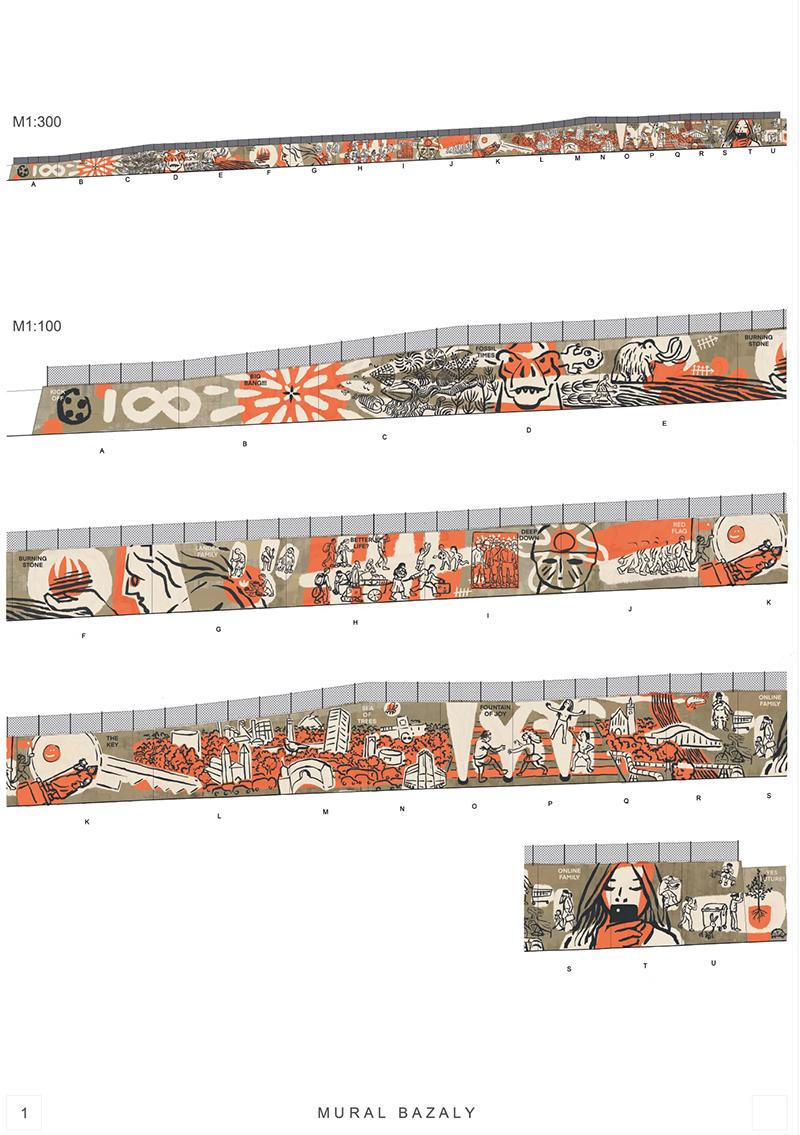 A total of 11 entries (authors or art curators) submitted their proposals to the international art competition Mural Bazaly, the main theme of which was the significant transformation of the city of Ostrava and the Moravian-Silesian region, including a reminder of Ostrava's most famous sports club FC Baník, which is inextricably linked to Bazaly Stadium anniversary of existence. The competition was announced by the statutory city of Ostrava together with the Moravian-Silesian Region, which is the owner of the wall and will then commission the work.

"It all started with the initial Excavation (Baník 100 years), and then the Big Bang and the origin of life followed. Fossil sediments will surprise Landek's grandfather with their burning - the stone is burning! The black stone attracts people from afar with its warmth. A vision of a better life. Exploring the underground. Blind red flag. The key to the new era, and Ostrava today. ”This is how Jan Lörincz (Bogy) describes the work, which was chosen by the jury as the winner completely unanimously. The originality of the whole design is complemented by the method of implementation. The author envisages the use of a pigment that will be created from construction waste and mineral mining waste in the vicinity of the site. Art school students will also be introduced to this unique process. The author of the proposal envisages the organization of a workshop that will introduce the technological process to the students.

Three members of the professional community sat on the jury. Jiří Surůvka, artist, performer and pedagogue, Daniela Rywiková, art historian and vice-dean of the University of Ostrava, and Alexandra Kroliková, curator and journalist. Other members of the jury were appointed representatives of both contracting authorities, Kateřina Šebestová, Deputy Mayor, and Jakub Unucka, Deputy Governor.

"Thank you for all the suggestions that came together, they represented a really diverse range of possibilities, from very illustrative to purely symbolic, but imaginative and bold. The jury and the invited experts duly assessed them all, and finally unanimously selected the design, which is also the story of our city, and evaluated it as a highly distinctive and original artistic achievement. I believe that passers-by or drivers will be interested not only for the first time, but on the contrary for a long time," said Zuzana Bajgarová, Deputy Mayor.

The realization of the artwork will be financed by the Moravian-Silesian Region, which owns not only the wall itself, but also the adjacent road. "The road administration of the Moravian-Silesian Region has already started repairing the wall, it was necessary to remove the overgrowth trees and clean the immediate surroundings of the future mural art. Subsequently, it will be necessary to repair the concrete and joints, clean the entire surface, and especially its impregnation. We will prepare a giant artistic space for artists, which will make Ostrava's Bazaly special, but will also bear witness to the transformation that our region is undergoing. The repair of the wall should be completed in mid-July, during August passengers in trolleybuses and cars will be able to watch how the work on the wall is created. It should be done in September," said Jakub Unucka, Deputy Governor of the Moravian-Silesian Region for Industry and Smart Region, and calculated that the wall repairs would cost the regional coffers CZK 3.4 million, the region will pay more money for the artwork itself. "The original intention was to combine painting and climbing or overhanging plants from the upper edge of the wall, but after several unsuccessful attempts, we have to be satisfied with painting only. I really wish that the public would accept the final and non-traditional proposal and the wall would thus become a new tourist attraction in our region," added Deputy Governor Jakub Unucka.

The jury also appreciated other competition proposals. The work of the artistic collective Petr Lysáček, Vendula Chalánková, Ján Obyšovský took 2nd place, while Aleš Veselý's design took third place. All proposals will soon be presented on the city's social networks. In addition to the award, the jury highlighted the quality and originality of other works that could be realized in other places with the consent of the city and the authors.

The city of Ostrava is committed to supporting the creation of street art. The Mural Bazaly project is thus not the only work that will enrich the public space with a work of art. The expert working group Streetart Ostrava, in cooperation with the investment department of the city, is currently preparing an assignment for the mural in the currently reconstructed underpass at the Dřevoprodej stop, the implementation of which will take place after the completion of the construction at the beginning of next year. Based on the mapping of areas suitable for the realization of street art, which took place in cooperation with the public in 2021, she also recommended walls ideal for legal free creation. One of the first swallows is the area on Yuri Gagarin Square, which the Silesian Ostrava City Council approved in mid-May as a legal area for artistic creation. The legalization of other areas in the Ostrava Jih city district is under negotiation.

"The aim of allocating some areas to legal creation is not only to aestheticize the place, but also to prevent other unwanted interventions that we often face - illegal graffiti, the systematic removal of which costs municipalities a lot of money. The promotion of art in public space is also a priority that the city has set itself in its cultural development strategy. We want to be an open and inspiring city. For example, we know from a survey of young people that the aesthetics of public space and street art are in great demand. The study carried out in 2021 even specifically mentions the support of legalization of the walls," said Deputy Zuzana Bajgarová to complete the context.