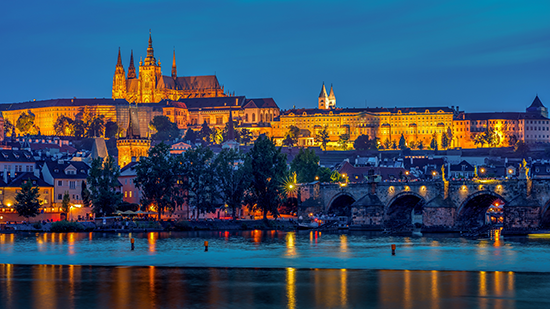 The Municipal Organization of the Capital City Services Administration (SSHMP) is currently reconstructing the flood closure of the Vltava canal Čertovka. The aim of the work is to speed up the installation of flood protection measures when declaring the second and third degree of flood activity. The modifications should cost about CZK 2.4 million and should be completed by the end of the year, according to the Deputy Mayor of Prague Petr Hlubuček (STAN) and the Director of the SSHMP Tomáš Stařecký.

"It was found that the fastening of the shells is no longer sufficient and that the guide rails no longer serve as they should. Therefore, we are now adjusting the shells and a complete reconstruction of the fence is being done," said the deputy, who is responsible for the metropolitan security.

The steel columns, which form the main supporting part of the flood barrier, are located on Čertovka directly in the flood gate. Outside of the flood conditions, they are tucked away in the embankment wall. In the event of danger, the flood gate will slide out. If there is a risk of a third stage of flood activity, the shells will slide out of the gate and the gates of the integrated rescue system (IRS) are inserted between these posts. These can be stacked up to a height of 2.8 meters.

The workers of the machine and construction company Labská are in charge of the modification of the shells in the flood protection fence on Čertovka. In order to ensure the safety of Kampa against possible floods, according to Starěcký, they are reconstructed on site from a pontoon and are not taken to work workshops. By the end of the year, the SSHMP plans to remove the sediment deposited in Čertovka. The reason is that mud, leaves and other pollution could get into the door track and slow down their closure in impending floods. According to the director of the SSHMP, the section 60 meters in front of the flood barrier will be cleaned, which should cost an estimated another CZK 600,000.

The gate on Čertovka, which protects against Kampa flooding, was last closed in May this year, when the first stage of flood activity prevailed. According to the SSHMP, was last pulled out on Čertovka in 2013.