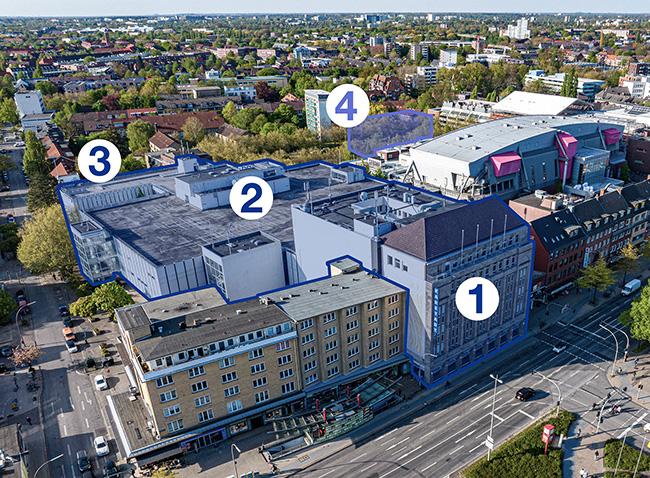 Wandsbek Markt, the heart of Hamburg's most populous district, will be given a makeover over the next five years. Union Investment, owner of the QUARREE Wandsbek and the neighboring Galeria property, has developed a forward-looking concept for the comprehensive upgrading of the location. Supported by all political factions, the development plan process is now starting.

The focus of the comprehensive project, which is being developed together with the district of Wandsbek, is the creation of living space, gastronomy and commercial space in order to close current gaps in demand at the location. Particular attention is paid to previously underrepresented uses and offers such as classic evening gastronomy and a modern, urban gastronomic offer. The focus on regionality in the offers - as has been increasingly the case since the modernization of the QUARREE Wandsbek - is intended to underline the character of the sustainable, locally networked quarter.

The declared goal of the overall project: The Wandsbek Markt district development is intended to create a lively center in the middle of Wandsbek that meets the needs of the residents and significantly increases the quality of life and stay at the location. "Quartier Wandsbek Markt is to become the center of social life and a meeting point for young and old in the east of Hamburg and neighboring Schleswig-Holstein," says Ronald Behrendt, project manager at Union Investment.

When developing the district, Union Investment wants to pay particular attention to the implementation of sustainable mobility concepts and develop the location into a modern urban district with innovative technical and user-oriented solutions.

The current plans in four components.

The old building of the Galeria property (section 1), which, like the QUARREE Wandsbek, is owned by an open-ended real estate fund from Union Investment, has shaped the district on Wandsbeker Markt for exactly 100 years. Union Investment would like to preserve the historic building with its listed facade. The termination of the lease with Galeria now offers the opportunity to develop a new, attractive and vital place in the center of Wandsbek through a combination of contemporary retail offerings, offices, cultural and educational facilities.

The extension in the rear part of the Galeria building (component 2) and the multi-storey car park (component 3), both built in 1966, can no longer be used due to structural properties. New buildings are planned here to upgrade the location. Union Investment attaches particular importance to urban integration and a lively mix of uses. The concept of mixed use is therefore being extended to the new buildings. For example, the construction of a market hall is planned here, which opens onto Wandsbeker Königsstraße and at the same time has a connection to QUARREE Wandsbek. Instead of the multi-storey car park, a new residential development is planned to close the perimeter of the block and the removal of the existing bridge structure over the street. From the planners' point of view, both measures are correct and important steps towards city repairs in this area.

Another element of the urban planning concept is the upgrading and redesign of the market area together with a development of the eastern part. In this way, the market square could also serve the people of Wandsbek outside of market hours as a lively neighborhood square with a high quality of stay and enrich the district. This part of the concept is the subject of a separate development plan procedure, which is still in preparation.

The structural implementation of the overall project is planned to start in 2024. Completion is scheduled for the end of 2027. Union Investment is supported by its long-term partner, Sierra Germany, who knows the location very well as the operator and rental partner of the QUARREE. Union Investment will invest in the hundreds of millions in the district project.

"With this project, we can further develop a fillet from Wandsbek," says Ronald Behrendt. “We have had close ties to the location for decades and are therefore very committed to its sustainable development. The project will significantly strengthen and beautify the center of Wandsbek and raise it to a new level. All Wandsbekers, the local trade and the many local companies and institutions can look forward to this.”