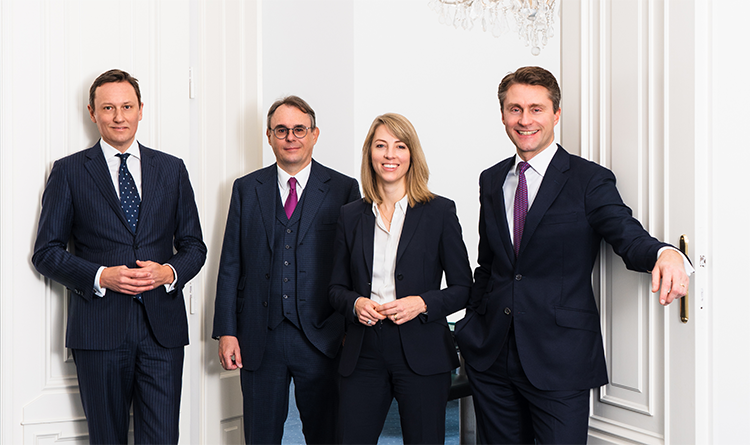 Andrea Gritsch, Claus Schneider, Sebastian Oberzaucher and Richard Wolf have been re-elected as the Management Board.

Over the next four years the board will continue to manage the firm, which has 13 offices in Central, Eastern and South Eastern Europe.

"With this decision our partners have confirmed their trust in our work. And it is an honour to carry on this responsibility, especially since our strategy of diversity and excellence proves to be the right path to pursue," comments Andrea Gritsch.

Wolf Theiss was able to increase its turnover by almost 40% over the last four years and for the first time surpasses the EUR 100 million turnover mark. The number of employees increased by more than 20% to around 700. Over 80 partners now work for Wolf Theiss, which also represents an increase of more than 20%. For its growth, the firm relies on both internal development of talented young lawyers as well as on lateral hires.
The firm's success is also reflected in the external recognition it receives: Wolf Theiss was repeatedly awarded the title "Law Firm of the Year" by Chambers Europe, International Financial Law Review and The Lawyer and won the European Women in Business Law Award as well as the Women Leaders Award.

Growth and Efficiency
The management team plans to continue its growth strategy. The existing close cooperation across all 13 countries will be further enhanced by a continuing focus on efficiency between offices, with a strong emphasis on knowledge and talent management.

"We believe that one of the key factors of success for a law firm is attracting the best talent. Our aim is to continue to strengthen Wolf Theiss's position as one of the top employers in the market and to create an environment for potentials to thrive," explained Sebastian Oberzaucher.

Wolf Theiss proactively embraces modern employment practices. Topics such as work-life balance, diversity and inclusion are anchored as core values in the corporate culture and are actively promoted through numerous projects. Wolf Theiss was the first law firm in Austria to create its own staff unit for ESG management to strengthen its commitment to sustainability and to integrate such principles more firmly into everyday work.
The four members of the management team will – as is the norm at Wolf Theiss – continue advising clients and continue to practice law.

"Our management team reflects the firm's combination of experienced and young entrepreneurship, has successfully navigated the challenges of the past and will continue to drive innovation and growth forward, under our guiding principle 'One Region One Firm," added Richard Wolf.