The European Commission wants to change the regulations on waste 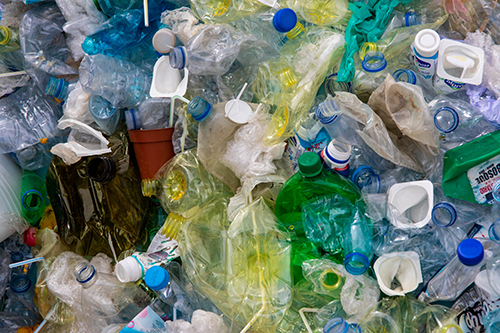 The European Commission yesterday adopted three new legislative initiatives to tackle EU-induced deforestation by tightening up waste shipment rules within the EU. It also presented a new soil protection strategy aimed at remediating all soil in Europe by 2050, the Commission said.

'The tools proposed by the Commission in today's proposals will enable the transition to a circular economy, protect the environment and raise environmental standards in the European Union and worldwide, according to the announcement.

Using a system of indicators, the Commission will assess countries and their level of risk of deforestation and forest degradation caused by goods covered by the regulation.

The Commission expects that the new rules will contribute to reducing greenhouse gas emissions and biodiversity loss by promoting the consumption of deforestation-free products and reducing the EU's impact on deforestation and forest degradation worldwide. Estimates that tackling deforestation and forest degradation will have a positive effect on local communities, including disadvantaged communities such as indigenous peoples who rely heavily on forest ecosystems.

The main driver of these processes is the expansion of agriculture related to commodities such as soybeans, beef, palm oil, timber, cocoa and coffee, and some derived products, the Commission said.

The EC also proposes to amend the regulation on shipment of waste, tightening the rules on waste disposal, and measures against illegal trade in waste.

Exports of waste to non-OECD countries will be restricted and allowed only if third countries are willing and able to manage the waste in a sustainable manner. Shipments of waste to OECD countries will be monitored and may be suspended if it causes serious environmental problems. According to the Commission proposal, all EU companies that export waste outside the EU should ensure that their receiving facilities are independently audited to demonstrate that they manage the waste in an environmentally safe manner.

Within the EU, the Commission is proposing to significantly simplify existing procedures, making it easier for waste to be fed into a closed loop.

This will help reduce the EU's dependence on virgin raw materials and support the innovation and decarbonisation of EU industry to meet the EU's climate goals. The new rules will also introduce waste shipment into the digital age by initiating electronic document exchange, the European Commission said.

According to the Commission, the Waste Shipment Regulation further intensifies the action against illegal waste trafficking, which - accounting for up to 30% of waste shipments worth EUR 9.5 billion per year - is one of the most serious types of environmental crime.

To improve the efficiency and effectiveness of the enforcement system, the regulation envisages the creation of an EU Waste Shipment Enforcement Group, empowering the European Anti-Fraud Office (OLAF) to support international investigations by EU Member States into illegal waste trafficking.

The Commission also presented a new EU soil strategy. The strategy aims to increase soil carbon on farmland, combat desertification, rehabilitate degraded lands and soils, and ensure that all soil ecosystems are in good condition by 2050.

The strategy calls for the same level of soil protection as exists for water, marine environment and air in the EU. This goal is to be achieved through a legislative proposal submitted by 2023 on a new soil law, the Commission emphasized.