15 appeals against modifications to the surroundings of the Prague Intercontinental 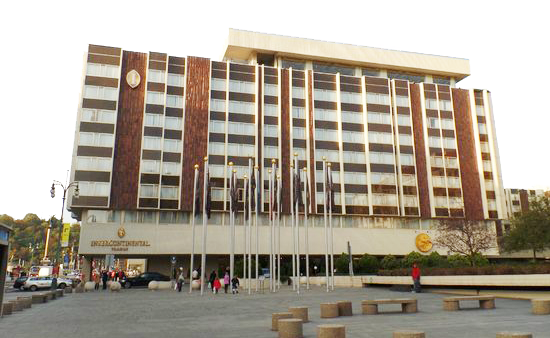 The building office of Prague 1 has received 15 appeals against a zoning decision for a project to modify the surroundings of the Intercontinental Hotel, which include a new building on a piazza named after Miloš Forman. When asked, Petra Pekařová from the external relations department of the city district office stated this today. The appeal was filed by the capital or local residents who do not like the building on the square.

"The appeals will then be published on the official notice board with a deadline for comments and will then be forwarded to the appellate body, which is the Department of Building Regulations of the City of Prague," Pekařová said. Marek Vácha, a spokesman for the Municipal Institute for Planning and Development (IPR), confirmed that one of the appeals was filed by the institute on behalf of the capital on the basis of a decision by the town councilors.

Arnika stated in a press release that the locals, who do not like the plan to build a new glass building on the corner of Pařížská and Bílkova streets, also filed an appeal. According to them, the Piazzetta should remain undeveloped. The association also criticized the appeal of the IPR, in which, according to him, there is no request to review the original positive opinion of the municipality, so it will be ineffective. According to Arnika, in accordance with the negative opinion of the city management on the project, the municipality should also not have allowed the investor access to the city land around the construction site.

In January 2019, the Intercontinental Hotel was bought by entrepreneurs Oldřich Šlemr, Eduard Kučer and Pavel Baudiš through their R2G fund. Subsequently, they presented a project that envisages a comprehensive renovation of the hotel's surroundings, including new public spaces and buildings. Opposition was aroused by the plan of the glazed new building, disputes have arisen in the past regarding the possibility of stopping the space in Prague 1.

Despite the objections, the building authority issued a non-final zoning decision in June, which is the first step in approving the modifications. Should the appeals now not succeed, a final decision on the location of the building will be followed by an application for a building permit. In the meantime, the owners have already started the reconstruction of the hotel, which will be operated by the Fairmont Hotels & Resorts chain under the name Golden Prague Hotel after the reconstruction.

The InterContinental Hotel was established in a brutal style on Pařížská Street between 1968 and 1974 in collaboration with three architectural groups led by Karel Filsak. It was the first international five-star hotel in the former Czechoslovakia and is one of the architecturally significant new buildings in the city center. Last year, however, the Ministry of Culture did not approve its inclusion as a listed building.