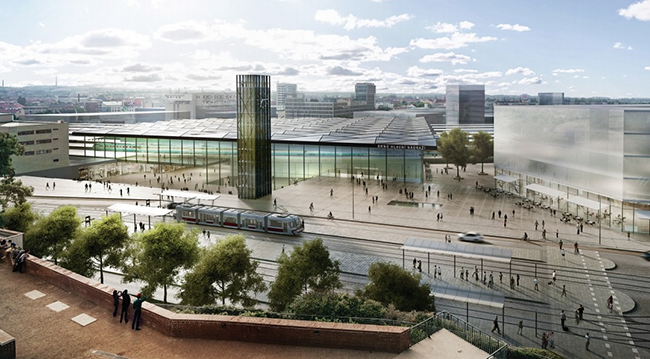 The new Brno main railway station will be built according to the design of the Dutch studio Benthem Crouwel Architects, which is behind the Rotterdam railway station project or the reconstruction and completion of the Amsterdam railway station. According to the winners, the Brno railway station will become a new gateway to the city and a positive impetus for the emerging Trnitá district on the Svratka river embankment. The results of the international competition for the design of the station were presented today by the city management. The construction of the transport hub is to cost an estimated 45 to 48 billion crowns.

The selection of the expert jury, which also included the architect Eva Jiřičná or the urban planner Peter Gero, was confirmed this week by the management of the city of Brno and the Railway Administration. "For Brno, this is one of the milestones of its further development. It is the first step towards the development of the whole neglected locality, the creation of new buildings, apartments, parks for recreation," said Mayor Markéta Vaňková (ODS).

According to Mojmír Nejezchleb, Deputy General Director for Railway Modernization of the Railway Administration, the authors of the winning design will supervise the elaboration of the project documentation for the new building. "They will be a guarantee that, when completed, the new railway station will not only be the pride of South Moravia, but also a place that passengers will really enjoy," he said.

The railway administration assumes that money from future subsidy titles should be used for the construction. The administration will act on the plots of land, according to which Nejezchleb is the majority of Czech Railways. But there are also some lands of private owners, with which the city should help in negotiations.

According to the jury, the winning design combines a reference to historic public buildings with a modern interchange and quality public space. It emphasizes the Brno genius loci and the assessment of the practical functioning of the new station building and its surroundings. "During the competition, we also recommended that some parts of the design be further refined, so that the result will better meet the current strict requirements for the new station building," said city architect Michal Sedláček, who sat on the expert jury. He stated that the assumption of the completion of the new building of the main railway station goes to the years 2032 to 2035.

Today, the Brno railway junction is no longer in terms of capacity or technology and its modernization is necessary. Without it, according to the city management, Brno would have stalled at the end of the last century, when the last big change took place together with the construction of the freight line. Brno has been prepared for the construction of a new railway station in a relocated position several times, but the plans have repeatedly been stopped by the unfavorable situation from the Great Depression through the Second World War to the occupation in 1968.

The competition was two-round, 12 teams competed, four of them advanced to the finals. The public will be able to see all the designs at the exhibition in the Křížová corridor of Brno's New Town Hall. The opening will take place on September 30 with the participation of the winning team. A large model of the new Trnitá district, which was used by an expert jury in its evaluation, will also be presented.

The new station will stand by the river on the site of today's lower station. Now the main Brno railway station is in the city center. The location of the station was decided in 2018 by representatives of the city and the region.