Metro D has an invalid building permit. the people of Pankrác have already appealed 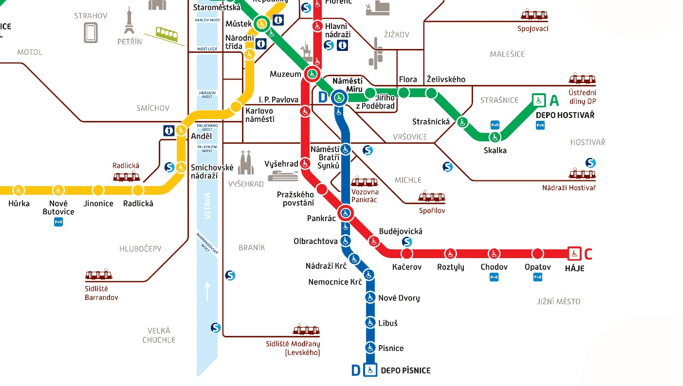 The Prague Metro D project has obtained an invalid building permit for the main building and construction site equipment. Part of the residents of Pankrác has already appealed against the permit. The start of construction may be delayed, Deputy Mayor Adam Scheinherr (Prague Sobě) said yesterday. According to the capital's plans, construction should begin in the spring of next year. The appeal was filed by the Pankrácká společnost association, which has been opposing the construction of the metro for a long time. It does not agree, among other things, with the construction of the Olbrachtova station. According to the deputy, the city has prepared several concessions, which are being negotiated with the inhabitants. In the first phase, Metro D will connect Pankrác and Písnice.

"There are two possibilities. We will either agree with Pankrácká společnost and SVJ Kovářovicova or not, and then it will be resolved by the Ministry of Transport. But before the decision is made, the start of construction may of course be delayed," Scheinherr said.

Locals have long been bothered by several things in the project. One of them is the construction of the so-called pile wall near the future Olbrachtova station, the size of the construction site or the felling of mature greenery. Scheinherr told ČTK today that in all its objections, the city is trying to meet the needs of its inhabitants. "The construction site will be a third of the original plan and will not be in front of the house. From the original plan to cut down about a hundred of the 109 trees, we retreated to the most necessary felling of 33 trees," said Scheinherr.

According to information published on the website of the Pankrác Society, however, people do not believe in the progress of the city and point out that all controversial points remain in the project documentation. "So an old, unacceptable variant for residents and the association, obtained an invalid building permit," the statement said. People do not even believe the argument that the city now needs to obtain a building permit as soon as possible, and then make the promised changes to the project.

The correspondence between Scheinherr and residents, shows that the transport company (DPP) will add a change to the project documentation to the files by 28 July, from which the pilot protection structure and the production shaft will disappear, and the company will also request a reduction on the 33 trees mentioned. According to Scheinherr, the changes will cost about CZK 100 million. "But it's still better than postponing the construction, which would make it more expensive by several billion," he added.

The difficulties have accompanied the construction of metro D for a long time. The last time the Ministry of Transport canceled the objection of the municipality's bias filed by the Pankrác Society in June this year. At the same time, the Office for the Protection of Competition (ÚOHS) decided that DPP may enter into a contract with the winner of the tender for the construction of the first part of the metro. This blocked an interim measure issued against an objection from one of the construction companies. For many years, the municipality also had problems acquiring land, especially in Krč. Here he finally agreed with the owners.

In the first phase, a metro will be built between Pankrác and Nový Dvůr and will then continue to the Písnice Depot. In the future, a section from Pankrác to náměstí Míru is to be built. Where the metro from Náměstí Míru will lead, it has not yet been decided. One of the variants was Republic Square, according to the other, the route should go to Žižkov and further to Vysočany. According to this year's update, the total estimated price is CZK 97.79 billion and the investor is DPP.