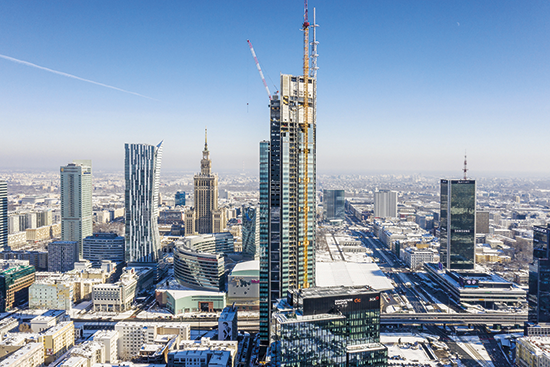 The lowest amount of space under construction since 2010 may point to a supply gap in 2023.

"The reintroduction of coronavirus restrictions and the continuation of the hybrid working model have affected the overall performance of the Warsaw office market in terms of developer activity, which along with lease volumes, is at its lowest level in 11 years. Despite a slowdown and the cautious approach adopted by those in the market, we do see an increase in enquiries from tenants. In addition, there is also an increasing interest both from companies which are looking at entering the Polish market as well as those which are planning to expand their operations in the country. This particularly applies to companies from the modern business services, technologies, and pharmaceutical industries whose interest will translate into concrete lease volumes in the medium-term, following a relatively quiet period overall on the market," comments Piotr Kamiński, Head of Office Leasing at JLL Poland.

Demand – cautious approach adopted by tenants
According to JLL, H1 2021 saw tenants sign traditional leases for a total of approximately 250,000 sqm in Warsaw. This means that the total take-up in the first six months was 26% lower than in the same period last year (when the market had an excellent Q1). City centre and COB (Central Business District) accounted for 60% of office demand.

Tenants are currently taking a cautious approach to office demand decisions. Some choose to extend their lease for a short period, waiting for normality to return before making long-term commitments. Interestingly, the largest leases this year were made by public entities, which are less likely than corporates to introduce a hybrid working model, adds Mateusz Polkowski, Head of Research & Consulting, JLL.

In the first half of the year, a slowdown in the growth of sublease offers in Warsaw was noticeable. Currently, 120,000 sqm of such space is available on the capital's office market.

"In the second quarter of this year, following the easing of restrictions, we observed a marked increase in tenant interest in flexible space. The average occupancy of flex offices in the central districts of Warsaw approached pre-pandemic levels, and sometimes exceeded 90%. Many companies now treat such offices as an alternative to traditional leases, taking advantage of flexibility both in terms of the lease duration and the number of occupied workstations. This solution is also seen as a way to reduce the risks associated with the unpredictability of the current economic climate. Furthermore, corporations are increasingly willing to use flex space as temporary space for either project work or absorbing increased staffing numbers resulting from recruitment drives," explains Adam Lis, Flexible Office Solutions Manager, JLL.

"Data shows that by the end of the year, total new supply will be around 370,000 sqm, which if achieved, will be the second-best result since 2016. However, development activity currently stands at less than 370,000 sqm under construction, the lowest level since 2010. The Bridge from Ghelamco Poland is the only project whose construction has started in Warsaw this year. Atenor, has also started demolition of UBC I, which will be replaced by the Lakeside office building," adds Piotr Kamiński.

The largest project under construction is Varso Tower from HB Reavis (over 60,000 sqm).

"The increase in the vacancy rate is due both to the cautious approach of tenants in signing contracts for space in the existing buildings and the delivery of significant new supply to the market in Q2. with the occupancy rate for new supply hovering at around 44%. However, 2023 may see a reverse of the current situation as a result of reduced supply of new office space. This could especially be the case outside the centre, where companies looking for an office in a new building will have a very limited choice," comments Mateusz Polkowski.

Office investment market:
"In H1 2021, the value of office investment transactions in Poland was €800 million, with Warsaw accounting for approx. €425 million. The deals in the capital city were the sale of Villa Offices by Echo Investment to the KGAL Group for €86.7 million , the acquisition of the Immofinanz portfolio by Indotek for €72.5 million and the acquisition of the Spark B building by Stena Realty for €70 million. It should also be noted that in the first half of the year the first prime office transaction in the city centre was concluded with Generali Real Estate acquiring Le Palais from Patrizia. We can also see investor interest in office buildings outside the city centre, an example of which is the sale of the Neopark complex in Mokotów by Yareal to Amundi Real Estate," comments Tomasz Puch, Head of Capital Markets in Poland, JLL.

At the end of the first half of the year, prime office yields in Warsaw were estimated at 4.5%.