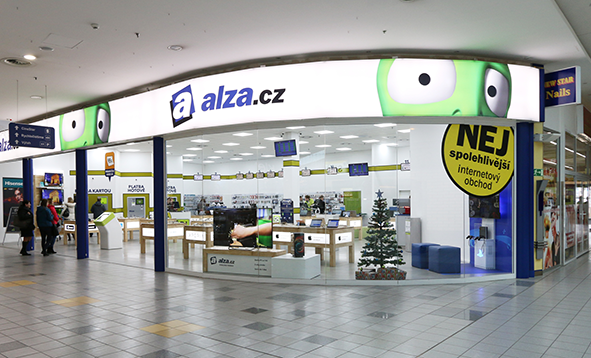 Last year, the largest domestic online store Alza.cz increased its turnover by 28 percent to a record 37.3 billion crowns without VAT. The number of customers has grown to almost five million. They created 15.8 million orders on the e-shop, which is 3.5 million more year-on-year. Almost half of them were paid for by card online and a quarter was delivered to AlzaBoxes in the high season. The company's representatives announced today.

Alza has grown in all countries where it operates. It recorded growth of 23 percent in the Czech Republic, 36 percent in Slovakia and 27 percent in Hungary. In Austria and Germany, it grew by 250 percent, respectively. by 236 percent.

In addition to the expansion, Alza has invested in the development of its services and the offered portfolio of goods. "We focused on our private labels, such as Campgo or Stormred sports equipment, Bery Jones nuts or accessories for AlzaGuard mobile phones and AlzaPower products, or the organic AlzaEco drugstore," said Petr Bena, Deputy Chairman of the Board. The turnover of the Alza Dropshipment program increased by 220 percent year-on-year, also thanks to the involvement of new large partners such as the Zoot fashion retailer or Alkohol.cz.

During the pandemic, the decision to intensively build a network of self-service AlzaBox dispensers, which enables safe collection of orders, proved to be crucial. E-shop more than tripled their number to 700 during the year.

In 2020, 15 specialized segments reached the billion mark. Mobile phones exceeded the turnover of CZK 4 billion, laptops, home electronics and accessories for IT and mobile phones ended just below this level. The new billion-dollar segments included cosmetics and drugstores, hobbies and gardens, toys, wearable electronics, services, sports and printers, and consumables. "The record day for us was December 14 with sales of CZK 292.5 million and 119,715 orders. This represents an average of 1.39 orders per second," added Marketing Director Jan Sadílek.

Alza was established in 1994. It is currently owned by a group of investors who control it through the holding company L.S. Investments Limited.