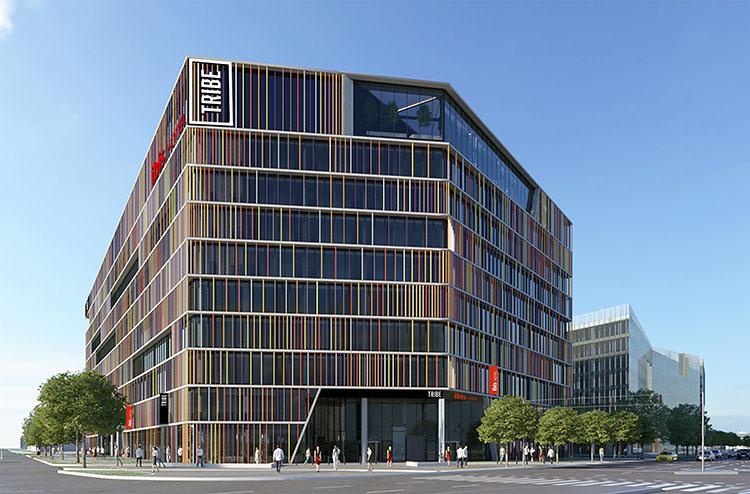 WING and eMAG-Extreme Digital have concluded a long-term lease agreement for the 3,800 square metre office space in the Liberty complex. The company’s future office will be housed on the third and fourth floors of the building’s south wing facing Könyves Kálmán körút. The dynamic expansion of eMAG-Extreme Digital made it necessary to rent the office area on two floors with a mixed layout of open-plan and cellular offices. The new headquarters will be the new workplace of about 300 employees of the company from early 2023.

“The interconnected office floors of the two traversable wings of Liberty Office building, also ideal for headquarters, have a floor area of almost 5,000 square metres, which means that they could be the optimal solution for companies of all sizes, and even those with special expansion needs. We are delighted that eMAG-Extreme Digital has chosen Liberty for its new office space, which is flexible enough to accommodate future working styles”, said Gábor Angel, WING Zrt.’s Deputy CEO for Office Developments.
EMAG-Extreme Digital's office space on two floors will be accessible via the main entrance in Könyves Kálmán körút. The property will boast the same high quality for which the developer has become known, incorporating office functions in line with today’s demands, including community spaces, its own terrace and a conference room designed to accommodate meetings of various sizes. In addition, employees will also be able to use the wide range of complex services offered by the Liberty building, such as taxi ordering, dry cleaning, event organisation, catering and booking meeting rooms, along with a café, a restaurant and an eMAG-easybox automated package delivery station. Plans also include a supermarket. Liberty will also be home to a dual-branded three-star ibis and four-star Tribe hotel; employees working in the office building will be able to use its services at a discount, including the panoramic rooftop bar, set to be a great place for after-work meetings or team building. Thanks to the underground parking garage on four levels, the building will offer an exceptionally high number of parking spaces, 20 percent of which will be equipped with electric charging points.

“As the important final step in the merger of eMAG and Extreme Digital, we are moving into our new headquarters within the Liberty complex. In order to support our future growth and provide our colleagues with an environment for effective work, we were seeking an inspiring office complex, offering open community spaces, design ed to be able to meet the demands of the type of hybrid work that has become a part of our company culture. The new office will be easily accessible to employees and partners using public transportation and bicycles, as well as electric vehicles,” eMAG-Extreme Digital managing director Balázs Várkonyi said of the agreement.

It is located at the crossing of Albert Flórián út and Könyves Kálmán körút at the gate to the city centre for those arriving from Budapest Liszt Ferenc International Airport. The M3 metro line, currently being further renovated, offers direct and convenient connection to the city centre, while tram line 1, which passes right in front of the building, provides another alternative. Domestic and international lines are available from Népliget Bus Terminal and Ferencváros Railway Station. Located just a few minutes away from Liberty is the Lurdy Ház shopping centre, along with a grocery store and a number of dining options; the neighbouring Telekom headquarters building is home to a Café Frei.

Significant developments have been completed or are underway in the neighbourhood, which continuously enhance the prestige of the area. The reconstruction of Népliget metro station on the M3 metro line has been completed, and at the same time, the public spaces in the area have also been renewed, including the previously completed Orczy Kert, as well as Bakáts tér, opened in early 2022. The coming years may see the implementation of further plans. With the Southern Circular Railway development, new stations in Budapest and more frequent trains will make everyday life easier for commuters and those travelling within the city. The new Transport Museum is now under construction opposite Népliget, which will also contribute to developing a neighbourhood with a high-quality urban atmosphere. Following the handover of the Telecom headquarters, WING is taking another significant step with the implementation of the Liberty Office building project towards developing the Népliget area, in the South-Pest submarket of the Budapest office market, into a dominant office location.

The office building, whose construction is proceeding at a dynamic pace, offers prospective tenants large, high-quality office spaces that can be flexibly arranged and have the highest technical quality available in the office market. The structure of the building will soon reach its highest point. The office spaces of the south wing are to be delivered in early 2023, with delivery of the hotel areas in the same wing scheduled for the second half of 2023. Simultaneously, the development of the 20,000 square metre north wing is also taking place and is similarly scheduled to be finished by late 2023. Liberty is being developed with a focus on employees’ wellbeing, health conscious solutions and pursuing BREEAM Excellent sustainability certification.

eMAG-Extreme Digital was represented by the JLL international property consultancy company when concluding the agreement.