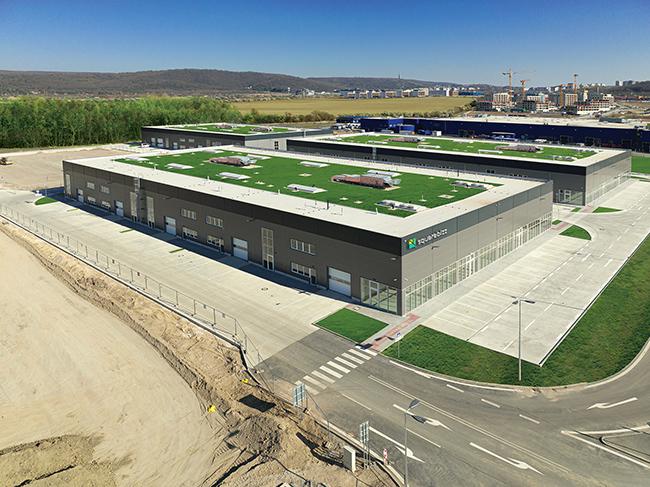 Less than a year ago the ground-breaking ceremony started the construction work of Austrian developer Karimpol Group's new project in Slovakia, Squarebizz Bory. On 21st of June 2022, the company officially opened the operation of the first phase of the project and launched the construction of the second phase, which will add an additional 15,000 square meters to Bory.

The first phase of the Squarebizz Bory project consists of 3 halls (A, B and E), which cumulatively offer 15,000 square meters of state-of-the-art retail, storage, service and showroom premises with up to 2,000 square meters of office space in the three halls. Completion of the second phase, halls C, D, F and G is scheduled for next spring where several tenants are already pre-committed as reported by the developer.

It is the first project in Slovakia which in this unique Work.Shop.Store. concept focuses on small and medium-sized businesses and offers them a high quality and energy-efficient premises. Moreover, the project offers the opportunity for a tailor-made, representative, and functional space with an excellent accessibility and fast connection to all B2B and B2C customers routes in the Bratislava region thanks to its location in the Bory area.

“After twelve months of a hard work, we are not only opened to business but we have more than ten successful brands signed up to Squarebizz Bory and an excellent occupancy rate of more than 80% for the first 15,000 square meters, that we have brought to Bratislava," says Edik Plätzer, Partner at Karimpol Group, "I am extremely pleased that alongside the opening of the first phase, we are also officially launching the construction of the second phase of the project and working on plans to expand our unique Work.Shop.Store concept to regional cities in Slovakia, with the first stop in Nitra. Our long-term goal is to bring the Squarebizz solutions for small and medium-sized businesses to the Czech Republic and Poland, where Karimpol Group has been established for many years," adds Plätzer.

Naturally, one cannot forget Austria, where six Karimpol's Squarebizz projects of a similar kind have been already operating for several years.

Within the Squarebizz Bory project, the company will help to create between 300 and 500 new jobs in the region. The location is one of the fastest growing areas of Bratislava with successfully operating chains such as Hornbach, Metro, Siko, Decathlon, Kaufland, as well as with dynamically growing residential development in the vicinity. Squarebizz Bory is directly accessible from the D2 highway and from Karlova Ves towards Devínska Nova Ves. With a direct connection to the highway bypass, the Bratislava city districts are accessible practically within a few minutes. Finally, two international airports are nearby.

"I perceive the Squarebizz concept as a project fully designed for the needs of entrepreneurs who are looking for new, representative and ecological space with a modular lease area, with offices directly implemented in each rental unit, with the possibility of a big showroom and especially in a location with a naturally high footfall, says Peter Šmitala, Project Manager at Karimpol Slovakia.

"We are currently in the phase of accommodating signed tenants in their newly leased premises, working on the external branding of the first phase and on the "green" side of our project - planting 6,000 square meters of green roofs on halls A, B and E. In addition to the green roofs, we of course have not forgotten about the greenery within the complex, where 194 deciduous trees, 153 deciduous shrubs and 10,650 square meters of lawn will be planted throughout the Squarebizz Bory project after its full completion," adds Mario Klas, Head of Property Management at Karimpol Slovakia.

Today, TȔV-SȔD, one of the largest fitness equipment dealers FITHAM and Kellys Factory Store managed by a top-quality bicycles manufacturer KELLYS BICYCLES, are already in full operation. In the next couple of weeks, ExpresPrint, Alpod, and the company Valivé ložiská will be up and running. Another big attraction is sure to be Virtuplex, that plans to open one of the largest virtual reality studios in Squarebizz this autumn.

„Our company decided for new headquarters in the Squarebizz project for its unique combination of commercial and storage space in a location that is easily accessible by trucks from the nearby highway as well as by public city transportation. I highly appreciate the architectural design of the building, which is customized for the operational needs of the tenants. Moreover, the landscaping around the complex, the greenery and the connection to the road infrastructre are also done professionally,” says Marek Hatrák, CEO at Alpod.

Ján Sopúch, CEO at INIPEX adds: “With its lucrative location and the high standard of the premises offered, we see the Squarebizz project as a strategic location for our operations. The company Inipex enters the market as a manufacturer of disposable ecological paper straws for beverages. Thanks to our modern technology, we achieve a daily production of more than 1 million pieces. Working in environmentally friendly space makes the production of eco-friendly products much easier. In this case, we dare say that the quality of the produced products will be complemented by the quality of the production space.