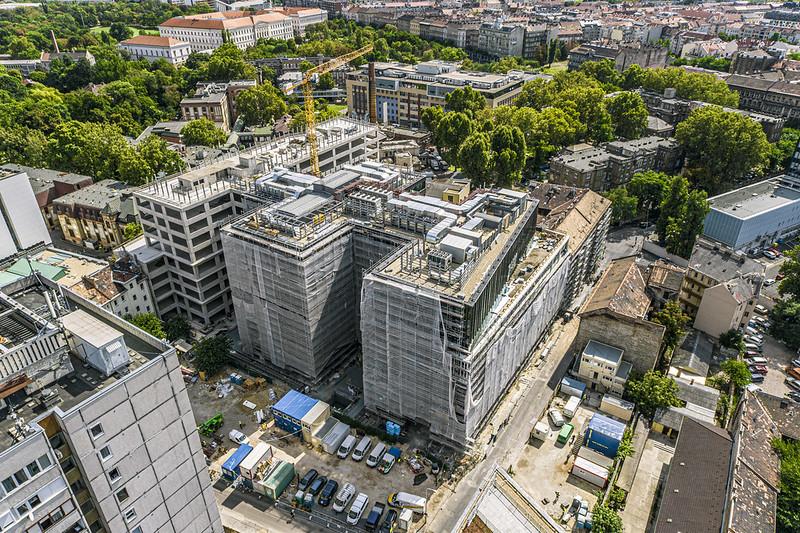 The second phase of the almost completely contactless Corvin Innovation Campus office building has reached its highest point. The second part of the complex provides 14,310 sqm of office space, and it has been developed according to the energy-cost-sensitive tenants’ needs. The new generation Corvin Innovation Campus will also function as an extension of Corvin Promenade. It will also offer energy-efficient, people-centred solutions, and a spacious park for future tenants.

The construction of the Corvin Innovation Campus is progressing according to plan. This spring the developer Futureal and Unicredit Bank signed a loan agreement for a total of EUR 80 million to finance the project. The 16,650 sqm first phase of the nine-storey office complex is expected to be completed by the end of 2022. Despite the pandemic, the first part of the building has been almost fully occupied, and the first tenants will be able to move in early next year. The second phase is expected to be handed over at the end of 2023.

Energy prices have risen more than tenfold in Hungary, making it a key factor for companies' operations. Meanwhile, rising residential energy costs could accelerate the return of office workers, Futureal experts predict. The exceptionally located Corvin Innovation Campus has already been equipped with several advanced solutions that could be a major benefit for the increasingly energy cost-sensitive tenants. The building located at the intersection of Szigony Street, Tömő Street, Apáthy István Street and Balassa Street is being developed in line with BREEAM sustainability standards. The complex will feature solar panels and a low-carbon smart parking system. At least 10% of the parking spaces will be equipped with electric chargers. The Corvin Innovation Campus is designed to meet the demands of the digital age, while it puts a strong focus on sustainability and people-centred environment based on WELL Building (WELL) requirements. The pet-friendly building located in the vicinity of the metro station is easily and quickly accessible by public transport. The office building will have an increased number of bike storage facilities, separate showers and lockers, a café and a restaurant for the convenience of employees and guests.

"Energy-efficient technologies and operational solutions as well as alternative energy use have a significant role in minimising cost. Futureal has been realizing its developments in line with BREEAM, the highest level of sustainability requirements over many years. As a result, the intelligent building management system that ensures the optimal operation of the mechanical and electrical systems, as well as the low-carbon and energy-efficient heating and cooling systems are now fully standard in Corvin Innovation Campus," said László Balassa, Project Director of Corvin Innovation Campus.

As part of Futureal’s Stay Safe initiative common areas at Corvin Innovation Campus will become almost completely contactless. Automatic doors and light switches with card sensors, as well as safe distance signs will be set in the building. Based on their decision during check in the above average size elevators will take employees and visitors to the right floor without touching a button, the toilets will also be equipped with contactless rinsing, hand washing and soap dispensers.

At the main entrance of the Corvin Innovation Campus, Futureal is realizing a memorial park, which will be named after the famous Hungarian actress Irén Psota, who was once born in Tömő Street. The park will also be filled with trees, benches made of tropical wood and community functions.