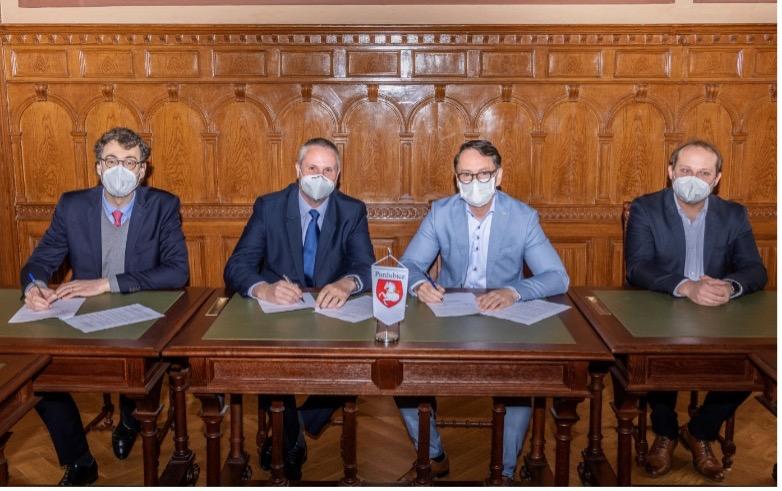 The city of Pardubice is transferring one of its largest brownfields, the area of ​​the former Tesla Kyjevská, to the new owner. The company Linkcity Czech Republic, with which the city representatives ceremoniously signed an agreement on depositing funds during yesterday's meeting, can thus embark on the reconstruction of this area into a modern Pardubice district and thus breathe new life into the complex.

"The city has been solving the future of the Tesla Kyjevská complex for several years now, so I am very glad that together with Linkcity Czech Republic we managed to bring the project to this stage, where we met here to sign the final contracts. I believe that the developer will be able to create a place here that will be attractive and attractive for people not only in terms of housing, but also leisure activities, and I would like to thank them very much for this cooperation. In addition, the Telegraphy building will be preserved and transferred to the property of the University of Pardubice, which will thus become another key partner in this area, ”states the Mayor of Pardubice, Martin Charvát.

Not only in the way in which the developer conceived the transformation of this area, but also in the preparation of the tender, the city sees an ideal solution for the revitalization of brownfields and the search for developers in the future. "The aim of the team that was preparing the tender was to develop, in cooperation with external consultants, such conditions of the tender documentation that will enable the city of Pardubice to achieve the set goal, ie to obtain a suitable developer for the selected area. I believe that we will be able to solve the fate of other brownfields in the city in a similar way, whether it is Masaryk's barracks or the Hůrka complex, "adds Jan Nadrchal, Deputy Mayor responsible for development and strategy.

Finding ways to make sense of unused urban brownfields is one of the current trends in sustainable construction. Clément de Lageneste, CEO of the company, describes the plans of the developer Linkcity in Pardubice: “We very much appreciate the trust we gained from the city of Pardubice two years ago, when it decided to entrust the revitalization of this area to Linkcity. We also appreciate his support throughout the preparatory phase. I believe that this is an exemplary way of cooperation between the developer and the city, in which the interests of the city are respected and balanced in planning the construction and the goals of the developer. We have been working intensively on the revitalization of the Tesla brownfield in Pardubice in recent years. The signing of the contract moves us from preparations and planning to implementation, so the inhabitants of Pardubice will soon be able to record the first construction changes in the area. In the following days, its evacuation and preparation for the construction of new facilities will begin, which we will begin in June. The site is facing a comprehensive revitalization so that it can come to life again and become a functional part of the city again. As part of the Nová Tesla District project, we will build a new residential district with 250 apartments, a supermarket and 10 terraced houses sensitively connected to the surrounding buildings. It will also include a square with furniture, other commercial spaces and a new parking house, which should relieve the highly exposed location at the Pardubice Hospital. "

The city will receive CZK 36,076,638 for the sale of this area, while 40 percent of this amount will go to the Pardubice region, which, based on mutual cooperation with the city of Pardubice, undertook to invest these funds in transport infrastructure on the Pardubice hospital and its connection to the Kyjevská overpass.