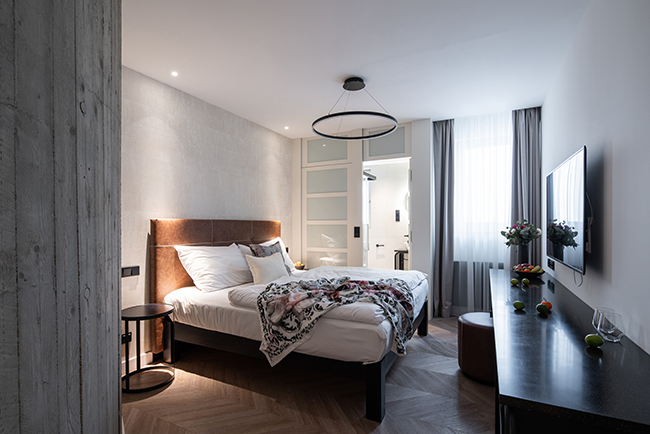 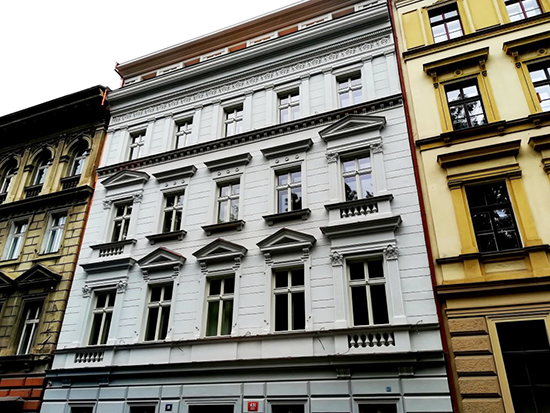 Chevron Hotel from the Old Town Apartments network is a new four-star hotel in Prague. It opened shortly before the onset of the coronavirus pandemic, so it is experiencing heavy traffic only now with a gradual opening of travel. It is located in Smíchov in Holečkova Street directly opposite the Kinský Gardens and was created by extensive reconstruction and rebuilding of the original apartment building from the 1990s, which became desolate due to time and poor maintenance. It has 50 design rooms on six floors, which are designed to maximize the interior space and allow for an authentic experience and relaxation. Behind their design is the British-Czech studio Jestico + Whiles, which also collaborated on the architectural solution of the entire project (facade).

“Before the reconstruction of any building, we always try to get as much information as possible about the building, the history of the site and the atmosphere there. On this basis, we create the main motive of the new project, which blends into both the overall concept and the individual design elements. Because the Chevron Hotel is in the center of the metropolis, just a few minutes from Prague Castle or Old Town Square, we wanted it to respect the surrounding buildings. In our design, we have preserved a number of historical elements, which are evident especially on the main street facade. It has been reconstructed to its former form and left in a light color, "comments Sean Clifton, director of the Prague studio Jestico + Whiles, which has a number of impressive realizations around the world and brought an unmistakable style to the look of the Chevron Hotel.

Smíchov was originally founded as an industrial district on the outskirts of Prague, which only over time turned into an attractive location for work and living and became part of the central part of the metropolis. “Tailor-made furniture with a light industrial touch is therefore a memory of the former inhabitants of the house, who were employed in this formerly industrial district. The look of the interior is based on the combination of smooth curved lines of black lacquered steel with luxurious leather and pure white accents," says Sean Clifton, adding: "Black and white patterns inspired by historic ceramic tile decors found in the original building are used on public floors. In contrast to them is the main staircase with an authentic railing, on which stands out a dark terrazzo surface imitating a stone with an admitted texture. Guests can ascend either this staircase to their rooms or use the new lift, which makes the building completely barrier-free.”

All rooms at the Chevron Hotel are fully air-conditioned and equipped with modern design furniture, creating a pleasant atmosphere. Characteristic materials in the rooms and at the reception are textured wooden walls in combination with curved exposed concrete, which marks the line of the staircase to the adjacent rooms. The whole is complemented by atypical luminaires in the form of oversized steel black hoops, which create a dominant element in the interior.

“The premises on the last sixth floor have been adapted and expanded to offer attic-style accommodation with unique views. They lead either directly to the Kinský summer house, which is set in a large park, or to the courtyard with a modern garden and comfortable seating. Another pleasant experience awaits guests right after waking up: for serving a continental breakfast, we have designed a special, beautifully lit room located in a modern glass extension,” concludes Sean Clifton.

For the investor of the Chevron Hotel, the Jestico + Whiles studio has already implemented the design of the Pure White hotels in Prague 2 in Nové Město, Urban Crème in Prague 1 in Na Poříčí Street and the Red & Blue Design Hotel in Holečkova Street in Smíchov.